Tudor's realization of Variations II, composed by John Cage as a birthday present for Tudor in 1961, is illustrated here as one of the earliest examples of a piece Tudor conceived for live electronic performance. Cage's original notation consisted of five points and six lines on eleven individual plastic sheets and instructed the performer to create measurements between the dots, representing sound events, and the lines, representing parameters of sounds (amplitude, duration, overtone structure, frequency (pitch), point of occurrence, number of sounds structuring each event). The resultant measurements defined the parameters of each sound event.

Tudor's realization departed dramatically from pre-determined measurements. He chose instead a binary process in which each sonic parameter could have one of two values: simple or complex. His performance notation consisted of fifty squares, one square per sound event, presented sequentially in rows on the front and back of three narrow pieces of heavy paper. He called his square notations "nomographs" (see the image at the top of the page). 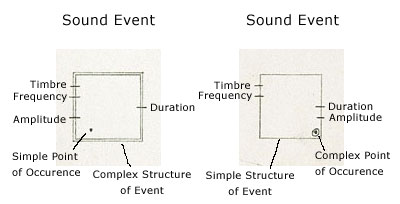 From notes, lists, and interviews in Tudor's archive, James Pritchett has pieced together how Tudor might have performed his "nomograph" notations. Tudor most likely interpreted each square by reading the placement of short horizontal lines that represented sound parameters and responding to their intersection of the left or right sides of the square. The first square shown here, for example, has a double border, indicating that it has a complex structure characterized by the simultaneous occurrence of this event with the event mapped in the next square. If left means simple, then timbre, frequency, and amplitude indicated on the first square are simple, that is, fixed in value, whereas duration is complex, that is, conceived by the performer as overlapping sounds. The single dot on the lowest portion of the first square represents a sound's single point of occurrence, the circled dot in the next square a complex (repeated) point of occurrence. The horizontal placement of the dots in each square tells the performer when the event occurs in clocktime.

A manuscript in Tudor's hand shows a repertoire of "single" and "complex" sounds that he could produce on an amplified piano, the instrument he chose for his realization of Variations II. He modified his piano electronically by positioning microphones above and below the instrument, attaching contact microphones to the piano or to stiff wire springs that could play the piano strings, and inserting various objects into phonograph cartridges that he used to scrape the strings. The signals picked up by the contact microphones from Tudor's activation of the strings or from the strings' free vibration created a complex system of feedback and resonance that he could not predict. "Single" sounds represented single actions (thimble slaps, clusters), which Tudor applied to different combinations of the simple and complex sound parameters, according to the "nomograph" notation. "Complex" sounds involved two or more actions made simultaneously, e.g., "scrapes" and fists or "ruler friction" and "ruler muted pizzicatto," again using different configurations of the four parameters. It is not possible to link particular actions with particular nomographs, but knowledge of the materials Tudor used for his actions (rulers, thimbles, cartridges, beaters, bongs) and of the complex feedback loops provides some indication of the sound world he developed on the amplified piano. Crashing, densely-textured, non-pitched washes of sound transformed the instrument into a new resonant object, more electronic and orchestral than pianistic.