Publications & Resources
The Conservation of Cave 85 at the Mogao Grottoes, Dunhuang 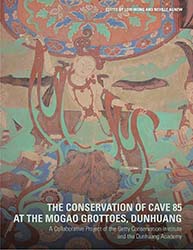 The Mogao Grottoes, a World Heritage Site in northwestern China, are located along the ancient caravan routes—collectively known as the Silk Road—that once linked China with the West. Founded by a Buddhist monk in the late fourth century, Mogao flourished over the following millennium, as monks, local rulers, and travelers commissioned hundreds of cave temples cut into a mile-long rock cliff and adorned them with vibrant murals. More than 490 decorated grottoes remain, containing thousands of sculptures and some 45,000 square meters of wall paintings, making Mogao one of the world's most significant sites of Buddhist art.

In 1997 the Getty Conservation Institute, which had been working with the Dunhuang Academy since 1989, began a case study using the late-Tang dynasty Cave 85 to develop a methodology that would stabilize the deteriorating wall paintings. This abundantly illustrated volume is the definitive report on the project, which was completed in 2010.