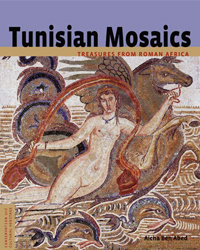 As the Roman Empire expanded its African settlements in the early centuries of the common era, thousands of mosaic floor pavements were fashioned to adorn the townhouses and rural estates of the African upper classes. Between the second and sixth centuries, mosaic art blossomed, particularly in Africa Proconsularis, the region comprising modern Tunisia. In contrast to the official art of imperial Rome, mosaics generally expressed the worldviews of private citizens. These artworks are remarkable for the intricate beauty of their polychromatic geometric and floral designs, as well as for figural scenes depicting the interests and activities of the patrons who commissioned them—scenes of daily life, athletic contests, gladiator spectacles, and classical literature and mythology.

Aïcha Ben Abed, director of monuments and sites at the Institut National du Patrimoine, in Tunis, is one of the world's leading experts on the mosaics of Roman Africa.