The Roman Conquest
In 264 B.C., the Roman army landed on the shores of Sicily. Hieron II, tyrant of Syracuse, immediately made peace with Rome, successfully controlling his kingdom for decades, while other Sicilian Greek cities, as well as Carthaginian towns and native communities, were conquered. The island became Rome's first province in 241 B.C.

Poised to hurl a boulder, the mythical Scylla decorates the relief medallion below that served as a centerpiece for a bowl—an example of the wealth of Sicily seized by Rome. Serpentine fish tails emerge from her lower body, while dog heads encircle her waist. Along with the whirlpool Charybdis, Scylla menaced the shipping lanes of passing sailors in the Strait of Messina, between Sicily and Italy. Here she threatens the drinker instead, who, swirling his wine like Charybdis, would discover the formidable monster at the bottom of the vessel to his amusement or dismay. 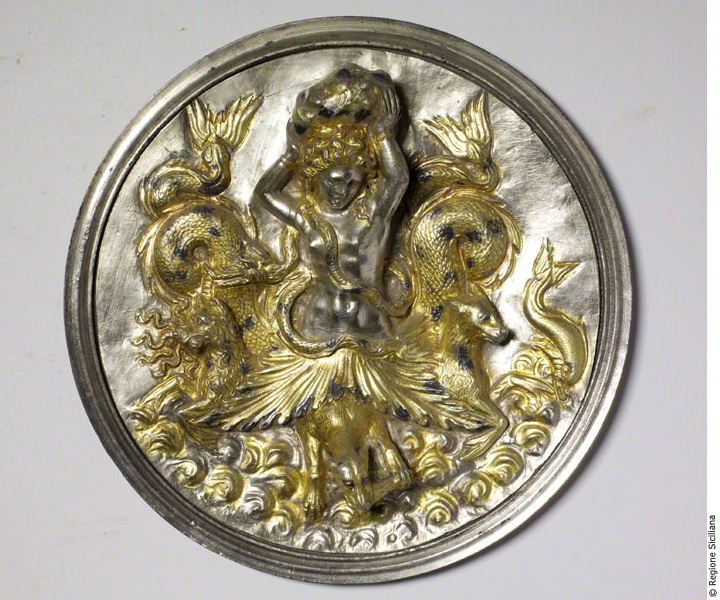 Loading the video
Shortly after Hieron II's death in 215 B.C., the Romans laid siege to Syracuse under the command of M. Claudius Marcellus. With the ensuing fall of the city in 212 B.C., all of Sicily came under full Roman rule. Victorious generals and rapacious governors pillaged temples and houses, taking sculptures, paintings, precious metal vessels, and scientific inventions back to mainland Italy. They also transmitted a taste for the wealth and culture of the Sicilian Greeks, whose artistic and engineering ingenuity would leave a lasting legacy in Rome.