Literature and Theater
Early mainland Greek conceptions of Sicily were shaped by the epic poetry of Homer. Odysseus's wanderings after the Trojan War took him to the western Mediterranean, where he encountered curious and savage creatures, such as the serpentine, dog-girdled Scylla, the whirlpool Charybdis, and the giant, one-eyed Cyclopes. Depicted in the visual arts, Homeric episodes were allegories for adventures of enterprising Greek traders and colonists in distant, exotic lands.

The cultured courts of the Sikeliote tyrants also attracted some of the best-known writers of the day, including the tragedian Aeschylus and the philosopher Plato, who both spent time in Syracuse. Two literary genres, pastoral and gastronomic verse, were developed in Sicily. The imagery evoked in the writings of the poet Theokritos and the gourmet Archestratos found counterparts in the works of local sculptors and vase painters, offering visions of a life of rural delights and convivial pleasures. 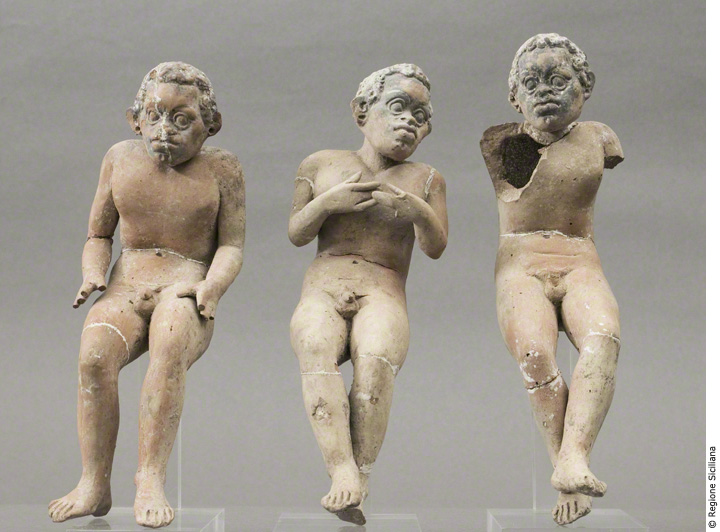 Loading the video
The three male figures above, wearing masks with African features, depict comic actors or entertainers who performed mime, dance, and acrobatics. Slender in build, each is animated in a slightly different way, and the one at far left has a moveable head. Excavated from a potter's workshop in Ortygia, an island in the harbor of Syracuse, the statuettes may represent traveling performers from Ethiopia.

The celebrated "Father of Tragedy," Aeschylus (Greek, 525–456 B.C.) traveled to Sicily on at least two occasions: once to Syracuse in the 470s B.C. at the invitation of the tyrant Hieron I, and then to Gela in 458 B.C., where he died a few years later. His plays found fertile ground in the strong tradition of theatrical performance on the island. After Aeschylus's death, the people of Gela gave him a lavish public funeral. His grave became a locus of hero worship, and the city held theatrical competitions in his honor. Reflecting the popularity of comedy on Sicily, the detail of the calyx krater (mixing vessel) above depicts Dionysos (god of wine and theater) seated on a wooden stage, watching a female acrobat accompanied by two comic male actors. Figures wearing comic female masks, perhaps representing Africans, peer down from the windows. Sicily developed a distinctive kind of comedy that included physical routines, yet here the presence of Dionysos elevates the scene from an ordinary entertainment to an imagined encounter. Dionysos also presided over the passage between life and death, and this vase contained the remains of a cremation burial. The deceased may have been an initiate of the god's cult, seeking a blissful afterlife. 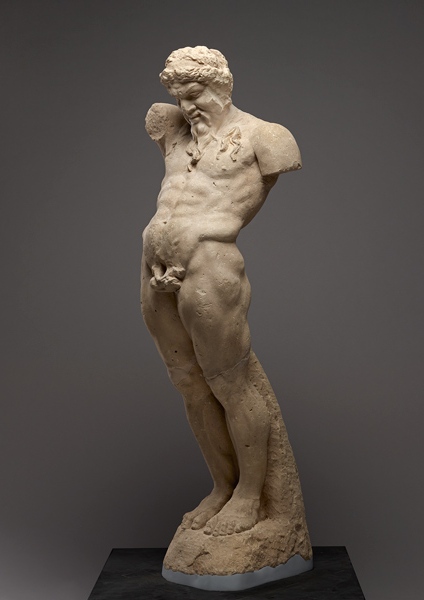 The pastoral genre created and perfected by the poet Theokritos (Sikeliote, 300–250 B.C.) flourished as Sicily was falling under the dominion of Rome in the 3rd century B.C. Probably a native Syracusan, Theokritos spent time on the Greek island of Kos and in the Egyptian city of Alexandria, the intellectual center of the Mediterranean. He is renowned for his idylls, which paint nostalgic word-images of Sicilian country life from the point of view of a sophisticated urbanite. Two of his best-known poems are "Idyll 1: Thyrsis," a lament for the herdsman-poet Daphnis, who dies of love, and "Idyll 11: The Cyclops," about the monstrous one-eyed Polyphemos, who woos the beautiful nymph Galatea in vain.

Theokritos's rustic characters—including satyrs, shepherds, and the woodland deity Priapos, child of Aphrodite by either Hermes or Dionysos—also populated the visual arts of the period, attesting to the appeal of bucolic fantasies during a time of civic turmoil. Priapos was a wild rural divinity of unrestrained male sexuality, possessing a phallus of exaggerated size, and images of him were set up in gardens as warnings to thieves. The statue to the right assumes the lordosis (bent backward) pose, looking down at his now-missing member. Found in a cistern on the outskirts of Syracuse in 1971, it is the first life-size image of the god in Greek art, and may have served a protective function.

Archestratos and the Life of Luxury

Rich harvests and bountiful seas nourished the widespread Sicilian reputation for lavish lifestyles. History's first celebrity cookbook author was a Sicilian native, Mithaikos, who practiced his culinary skills in Athens and Sparta during the 400s B.C. The gourmet Archestratos of Gela traveled throughout the Mediterranean in the 300s B.C., sampling and recording recipes for the Hedypatheia (Life of Luxury), a humorous guide to good eating written in verse. Sixty-two fragments of the Hedypatheia list the best fish and where to get them. Plato, who stayed in Syracuse for long periods around the same time, disapproved of the "Sicilian elaboration of delicate dishes" and the practice of feasting twice a day. His uncle, the politician Kritias, identified the drinking game of kottabos—in which revelers flung wine dregs at a vessel set up as "a target for wine-drop arrows"—as a Sicilian invention. Companions of the wine god Dionysos, satyrs drunkenly roamed wild places in lusty pursuit of sex. The satyr above carries a shepherd's crook and wears a rustic perizoma (loincloth) formed by rows of overlapping leaves. Holes through his right shoulder, cloak, and groin indicate that the relief once served as an appliqué, probably decorating a luxurious piece of furniture such as a dining couch. The wealthy Sicilian Greeks were renowned for their extravagantly adorned homes and dining couches veneered with ivory.