Eureka! The Discoveries of Archimedes
Archimedes of Syracuse (about 287–212 B.C.) was one of history's foremost scientists and inventors. More than a millennium ahead of its time, his work laid the foundation for branches of mathematics, physics, engineering, and even computer science. His achievements range from calculating a remarkably accurate approximation for pi to constructing mechanical planetariums and devising the water-raising "Archimedes screw." 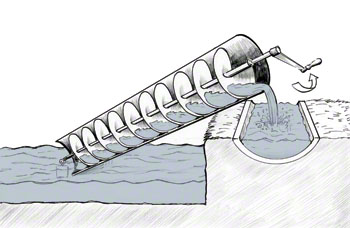 The water-raising "Archimedes screw"
Drawing his diagrams in the sands of the Syracusan harbor, Archimedes was closely tied to his native city and fulfilled commissions for the king, Hieron II. He designed an immense ship, the Syracusia, as a lavish floating palace for the ruler. When Hieron asked him to determine whether a crown was solid gold, Archimedes made his legendary discovery that a solid displaces a volume of liquid equal to its own volume, supposedly causing him to leap from his bath and run naked through the streets crying "Eureka!" (I have found it). When Syracuse came under siege by the Romans, he created catapults that covered different distances, and a giant bronze hook to upend approaching enemy ships. Archimedes was killed by a Roman soldier during the conquest of the city in 212 B.C., which gave Rome dominion over all of Sicily.

To disseminate his theories, Archimedes sent proofs from his native Syracuse to scholars in mainland Greece and Alexandria, Egypt. Written in a Doric Greek dialect, his texts were copied and recopied into manuscripts over centuries, while the originals were lost. Dating to the 900s, the leaf below is from the only one of these manuscripts that—due to its later reuse—still exists today. 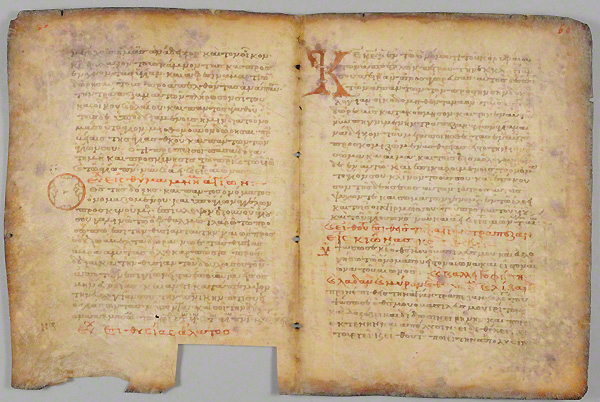 In the 1200s, a medieval scribe recycled the 300-year-old pages into a prayer book. He trimmed the parchment, erased the text, and turned the sheets at a right angle before inking on the prayers. Called a "palimpsest"—from the Greek palin (again) and psen (to rub)—this book is the sole surviving source for two works by Archimedes, which are now fully legible through imaging technology. Method shows that he employed the concept of infinity in his math, and Stomachion (Bellyacher) discusses an ancient puzzle on how a square divided into 14 pieces can be fit back together. Additionally, the book bears his treatise On Floating Bodies, which expands on his famed "Eureka!" observation about a solid submerged in a liquid. Though also preserved in Latin and Arabic translations, the palimpsest's Greek version brings us closer to Archimedes' original words.