The Greeks in Sicily
To settlers from the Greek mainland, Sicily was a new world of wealth and opportunity. Beginning in the late 8th century B.C., they founded colonies along the shores of the island they called Sikelia. Over time, young transplants from Greece proudly came to regard themselves as Sikeliotes—Sicilian Greeks. They brought their dialects and religious cults, transforming a land populated by native communities and North African settlers from Carthage into an important Greek territory. Abundant natural resources and fruitful crops fed a thriving economy that soon turned colonial towns into some of the most formidable and influential city-states in the Mediterranean.

In the early 5th century B.C., the tyrants Theron of Akragas and Hieron I of Syracuse, heads of the two great ruling families of Sicily, brought to their courts the foremost Greek poets of the day. Simonides, Bacchylides, and Pindar composed epinikia (victory odes) to glorify the kings and commemorate their successes in the equestrian events at Olympia and Delphi in Greece—victories that were also memorialized with monumental sculptures. Musicians, playwrights, and philosophers were also invited as guests, boosting the rulers' reputations as patrons of the arts on a par with the leaders of mainland Greek cities. Thus poetry, theater, and intellectual discourse enriched the cultural life of the island. 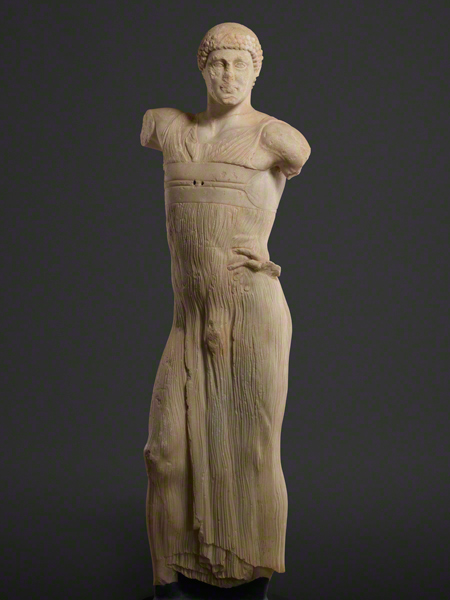 Loading the video
Widely considered the finest surviving example of early Greek sculpture in the round, the so-called Mozia Charioteer above demonstrates the virtuosity and creativity attained in the arts of Sicily during the 5th century B.C. Discovered on the small island of Mozia (ancient Motya), the site of a Carthaginian settlement off Sicily's western coast, the statue may have been seized as war booty. Between 409 and 405 B.C., Carthaginian forces under Hannibal destroyed the powerful Sikeliote city-states of Selinous, Himera, Akragas, Gela, and Camarina, looting paintings, sculptures, and other valuables. This figure was probably among the works taken from these towns to Motya, the Carthaginians' main outpost, where it was damaged a decade later during reprisals led by Syracuse. 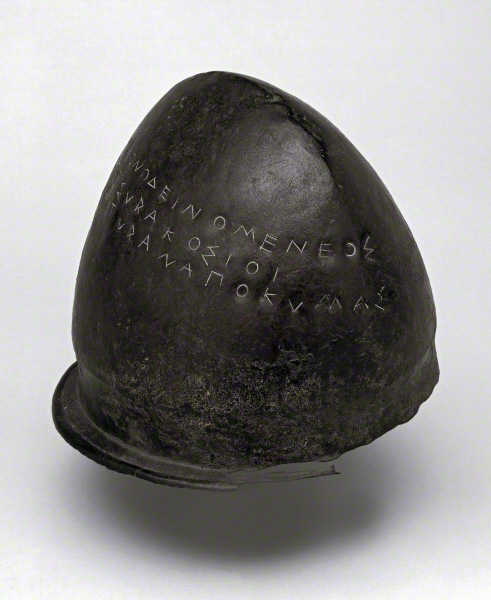 Once worn by an Etruscan warrior, this helmet was seized as booty by the triumphant Sicilian Greeks at a naval battle off the west coast of Italy in 474 B.C. Inscribed in the Syracusan Greek alphabet, "Hieron, son of Deinomenes, and the Syracusans [dedicated] to Zeus, Etruscan [spoils] from Cumae," it was deposited in the sanctuary of Zeus at Olympia, in Greece. The battle was fought by the Syracusans on behalf of the Greek colony of Cumae against the combined forces of the Etruscans and the Carthaginians—both major seafaring powers. In honor of Hieron I, tyrant of Syracuse, the Greek poet Pindar wrote an ode in which he described the battle as "freeing Greece from slavery."

Masters of the Mint

Beginning in the late 5th century B.C., a group of Sicilian Greek coin engravers, mainly active in Syracuse, added their signatures to the dies (molds) used to stamp coins. This practice was distinctive to Sicily—signed coins are rarely found elsewhere in the Greek world. Known as the Signing Masters, these remarkable craftsmen created extraordinary works of art on a miniature scale. Departing from the traditional profile portraits, they devised novel ways of representing heads in a lively three-quarter perspective, seen below, or striking frontal view. They also perfected the long-standing iconography of the chariot race, infusing it with a new dynamism by showing the horses careening at full gallop around a turning post.

The most celebrated coin artists of Syracuse, namely Kimon and Euainetos, designed gold and electrum coins as well as silver issues. They also engraved dies for the mints of neighboring cities such as Katane. In several exceptional cases, unsigned coins can be attributed to the hand of an anonymous master based on shared stylistic features.

Loading the video
Known as the "coin of coins," the tetradrachm from the city of Aitna seen above is one of the rarest ancient coins in the world. Zeus Aitnaios was the presiding deity of Mount Etna, the volcano on the slopes of which Aitna was situated. This image may depict his cult statue there, showing the king of the gods seated on a throne. Beside him, an eagle is perched on a fir, while the other side includes a beetle. Both the tree and the insect are indigenous to the mountainous region of northern Sicily.