Demeter's Island: Religion and Ritual
Settlers from mainland Greece brought their myths and religious practices to Sicily. To sanctify new colonies and maintain ties with mother cities, they built altars and temples. Apollo, the patron deity of colonists, received their first sacrifices, but other divinities—such as the wine god Dionysos and the deified hero Herakles—were also venerated. Preeminent among the honored deities were Demeter, goddess of grain, and her daughter Persephone (or Kore), whose sanctuaries dotted the island. 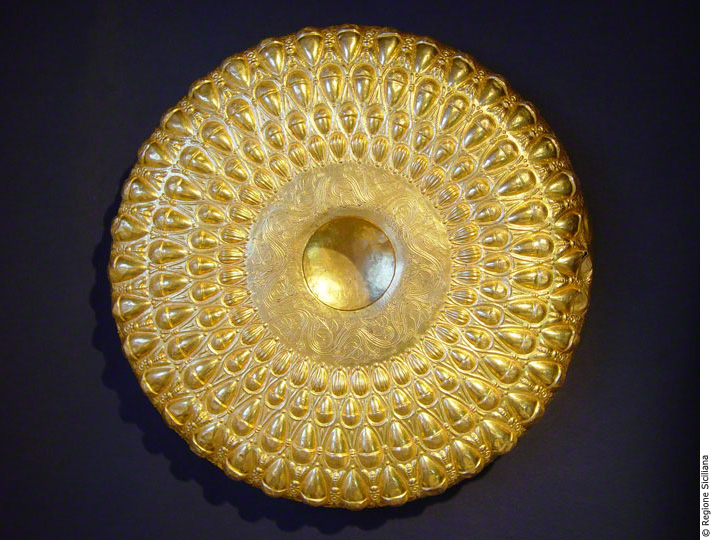 Loading the video
Called a phiale, the type of dish shown above was used to pour liquid offerings onto an altar during religious ceremonies. The term mesomphalos refers to its central domed knob, or omphalos (navel). Made of two and a half pounds of pure gold, this phiale would have also served as a costly votive gift and may have been part of a hoard, though its precise findspot is unknown. 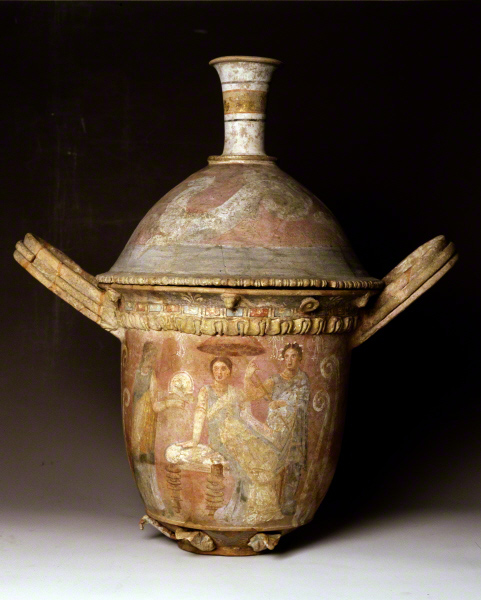 Workshops in the central Sicilian town of Centuripe produced a distinctive style of pottery with delicate, pastel colors applied after firing. These fragile vessels were not intended for everyday use but were made to be displayed in funerary ceremonies, and then placed in tombs. The epaulia, a ceremony in which gifts were bestowed on the bride, is painted on this vase above. Under a parasol outdoors, the newlywed leans comfortably on a couch and receives a fan from her companion. The lid is decorated with a sea monster. Wedding scenes are common on vessels discovered in the cemeteries of Centuripe. They may allude to symbolic marriage to the god Dionysos through initiation into his cult, promising a blessed afterlife. 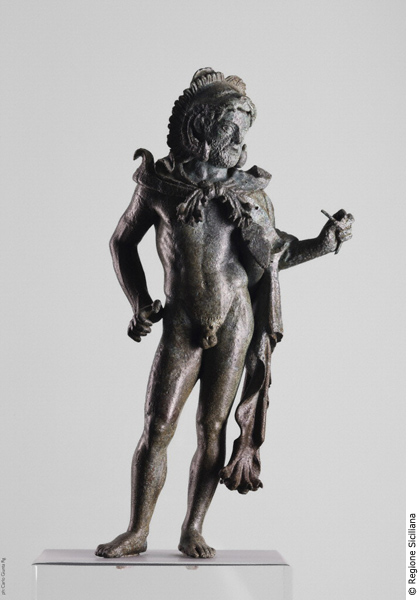 Born to the god Zeus and the mortal Alkmene, the hero Herakles was blessed with inhuman strength but condemned by Zeus's jealous wife Hera to perform a series of labors. Herakles traveled to the far reaches of the known world to complete these feats, vanquishing beasts that threatened civilized life.

By bringing order to untamed territories, he embodied the Greek settler, and Sicilian Greek devotees of his cult proudly linked his deeds to their newfound cities. After stealing the cattle of the triple-headed monster Geryon, Herakles drove them across Sicily, fighting the giant of Eryx along the way. At Himera, the town's namesake nymph caused hot springs to gush forth to soothe the weary hero, a myth that explains his association with health and restorative waters. The contrasting facets of his identity—solitary herdsman, violent aggressor, and peaceful healer—heightened Herakles' appeal among the men of rural Sicily, who not only tended flocks but also worked as mercenary soldiers.

Herakles was closely connected with healing waters. This statuette to the right was recovered from a riverbed in Contrada Cafeo (near Modica), suggesting that a shrine to the hero was situated nearby. Wearing his lionskin over his head, he holds a bow rather than the usual club. His other hand may have held a cornucopia or an apple of the Hesperides, the prize from one of his labors in the western Mediterranean.

Demeter and Persephone in Sicily

[Demeter and Persephone] made this island their favorite retreat because it was cherished
by them before all others.
—Diodorus Siculus, The Library of History, 60–30 B.C. 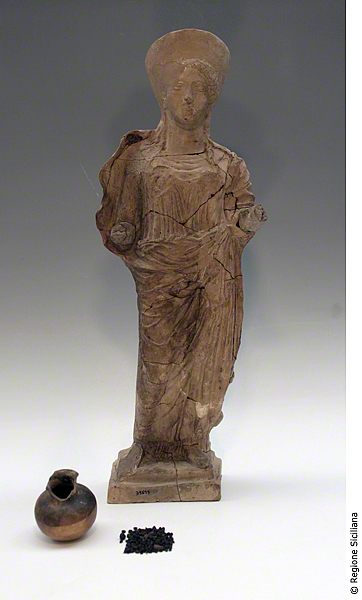 The cult of Demeter and Persephone was most enthusiastically embraced in central Sicily. There, according to myth, the god Hades had seized Persephone as she picked wildflowers on a lakeshore near Enna, taking her to the Underworld by the fiery volcano Mount Etna. Consequently, she spent part of each year below ground as Hades' wife and queen, and part above ground with Demeter. Her annual return from the Underworld was linked with agricultural fertility and the human life cycle, and the goddesses' cult was tied to female rites of passage such as marriage and childbirth. To their devotees, worship of Demeter and Persephone, as well as Dionysos and Herakles, also promised a blessed afterlife.

Found alongside a stone altar in a small shrine damaged by a fire, the votive figure to the left exemplifies Demeter in her aspect as Thesmophoros (Law Giver)—the goddess who gave mankind the knowledge of grain cultivation and civilized life. Nearby, left in thanks for a rich harvest, a miniature jug of wheat, barley, and spelt seeds was discovered carbonized by the flames, shown below. The cult image had been repaired in antiquity and given a new, somewhat larger head. With its tall crown, thick drapery, and separately attached arms, the figure is a diminutive version of large-scale statues of the deity.