Related Events
A variety of special programs complement the exhibition The Last Days of Pompeii. Tickets are required for most events; see details in the listings below.

Admission to the Getty Villa and to the exhibition is FREE; an advance, timed-entry ticket is required for general admission. For more, see information on planning a visit or call (310) 440-7300. 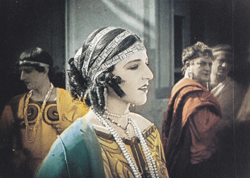 Learn more about this film event.

Learn more about this film series.

Pompeii on Display: Disaster into Art

The modern fascination with the eruption of Mount Vesuvius in A.D. 79 and the destruction of Pompeii has inspired diverse works of art, literature, and performance, from masterpieces of painting to a scene from The Simpsons. Antiquities curator Kenneth Lapatin shares his experience developing the exhibition, highlighting some of his most unusual discoveries. Free; a ticket is required.

Learn more about this lecture.

Discover how Pompeii and other ancient sites destroyed by the eruption of Mount Vesuvius in A.D. 79 have been an obsession for modern writers and artists of the first rank. Speakers explore topics such as fictional heroines, spectacular re-enactments, virtual-reality reconstructions, and Pompeii in modern and contemporary art and film. Participants include Mary Beard, Victoria C. Gardner Coates, Shelley Hales, Kenneth Lapatin, Jon Seydl, Adrian Stähli, and Nick Yablon. Free; a ticket is required.

Learn more about this symposium.


Deus Ex Machina by Tom Jacobson
A team of contemporary archaeologists fulfill an ancient Roman prophecy that ends the world.
Saturday and Sunday, November 3 and 4, 2012, at 1:00 p.m.

Clytemnestra by Tom Jacobson
Electra told from Clytemnestra's point of view; an irreverent revision.
Saturday and Sunday, November 3 and 4, 2012, at 4:00 p.m.

Explore the realities and fantasies of Pompeian archaeology with educator Shelby Brown and Kenneth Lapatin, curator of the exhibition. Revisit the ancient sites buried by Vesuvius in A.D. 79, examine the early excavations, and discover their transformation at the hands of modern writers and artists. End with a tour of the galleries to learn the curator's perspective. Course fee $35; $28 students. Open to 30 participants.

Whether you're just starting out or are brushing up on your skills, learn how to paint with this quick-drying medium. Work from ancient and modern paintings in the Museum's collection, the exhibition The Last Days of Pompeii: Decadence, Apocalypse, Resurrection, and still-life objects in the studio to independently realize your ideas on a canvas. Course fee $65 (refreshments provided; parking not included).

Kenneth Lapatin, associate curator of antiquities, the J. Paul Getty Museum, leads an hour-long tour of the exhibition. Sign-up begins 15 minutes before the tour at the Tour Meeting Place.

A special one-hour tour of the exhibition The Last Days of Pompeii: Decadence, Apocalypse, Resurrection. Sign-up begins 15 minutes before the tour at the Tour Meeting Place.

Grab the kids and run! A daylong festival of crafting, performances, and other family-friendly activities complements the exhibition exploring the role of Pompeii in the popular cultural imagination. Free; reservations required.

Learn more about this festival.

Why does Pompeii continue to fascinate after hundreds of years? Hear the strange and surprising stories of the ancient disaster. Pick up an iPod touch at the GettyGuide Desk on the first floor of the Museum.