This notion of Pompeian decadence has provided an acceptable setting for modern artists to present sensual scenes or subversive themes. It has also offered a vehicle to explore contemporary issues related to class privilege, slavery, sexuality, memory, and personal identity.

For many Neoclassical artists, ancient settings enabled explorations of sexuality that were not permissible in other contexts. Stretched out on a tiger skin, a young woman, personifying repose, reclines seductively as her companion, embodying mischief, teases her with an ivory hairpin. The figures' sensuousness, highlighted by their sheer garments and luxurious surroundings, is typical of painter John William Godward, who painted numerous scenes of idealized beauties in Pompeian interiors. The colored marble walls and the black-and-white floor mosaic in the doorway are copied from Roman residences discovered near the Bay of Naples.

In his most famous painting, Francesco Netti depicts the aftermath of mortal combat held at a Pompeian banquet for the entertainment of dissolute, drunken Romans. Presumably well-born ladies swoon around the winner, offering him wine as emaciated slaves drag off the body of his fallen opponent. The grim, moralizing tableau combines alcoholic excess and gluttony with violence and sex.

Although the scene has little basis in ancient practice—gladiators generally performed in public arenas and rarely fought to the death—it accurately represents archaeological artifacts, such as the victor's helmet, the wall decorations, and several architectural details, some of which also appear in the Getty Villa. 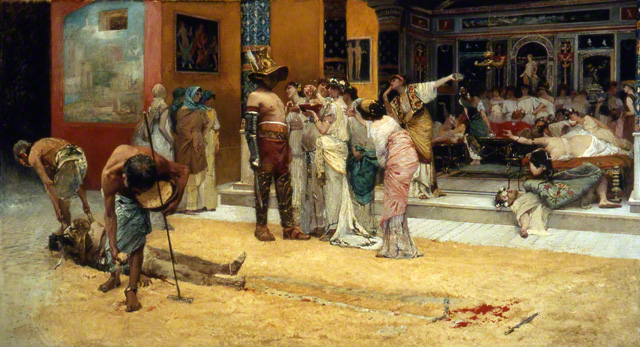 In Wilhelm Jensen's 1903 novella Gradiva: A Pompeian Fancy, an archaeologist develops a fixation on a beautiful young woman depicted in an ancient Roman relief. He imagines her walking the streets of Pompeii and perishing in the eruption of Vesuvius. The enigmatic, erotically charged figure of Gradiva (Latin for "she who advances") inspired intellectuals and artists, including Sigmund Freud and Surrealists including Salvador Dalí, Marcel Duchamp, and André Masson.

In this 1939 painting, Masson alludes to a crucial moment in Jensen's novella when the protagonist envisions Gradiva's death with the eruption of Vesuvius as she sits in front of a temple, laying her head on the marble steps. Masson's Gradiva raises her right heel, referencing the Roman relief, her pose reflecting that of another ancient figure, the Sleeping Ariadne. However, this Gradiva is far more aggressive and sexual than other models or the submissive character in the book. 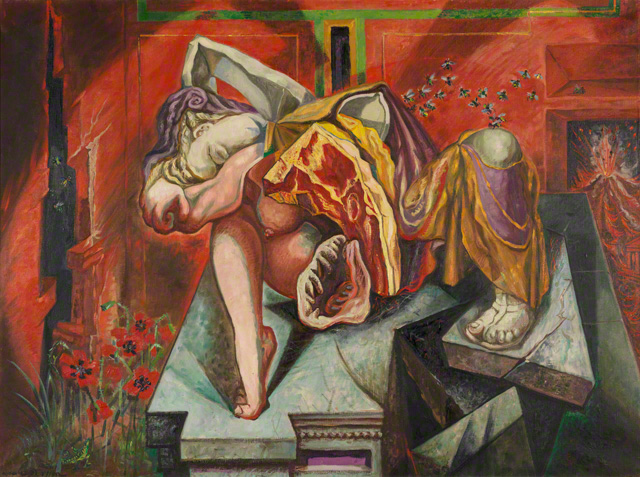