All performances take place in the Auditorium at the Getty Villa. Parking is $10 after 6:00 p.m.

Recently in the series

News of the Trojan War reaches Laodamia's ears on the day of her wedding to Iolaus, a shepherd from Phylace. As the nation mobilizes for war, she desperately tries to keep her new husband safe at home with her, but inadvertently exposes him to a wider world of politics and power. A nightmarish prophecy ensures that the charismatic General Odysseus assigns Iolaus to the front and when he is killed in combat, Laodamia becomes the war's first widow. How she deals with her grief has echoed for millennia through history and myth. Inspired by the handful of surviving lines from Euripides's lost play Protesilaos, The Laodamiad explores love, war, and loss.

This program is a staged reading with music. 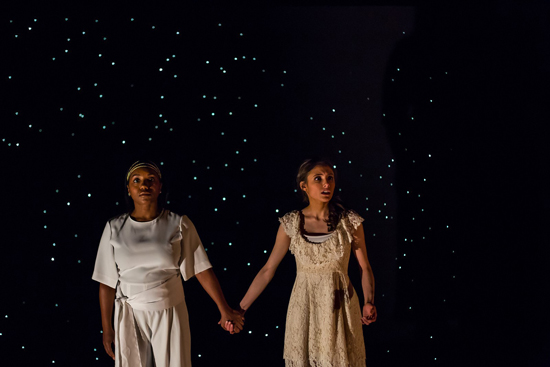 SITI Company Reads the Classics
Directed by Anne Bogart
May 17–19, 2013

New York–based SITI Company, led by director Anne Bogart, has been in residence at the Getty Villa on several occasions over the past four years, delighting and challenging audiences with its radical re-visionings of Antigone and Trojan Women. This season, SITI Company returns to the Villa to read aloud several ancient Greek plays and engage the audience and Villa staff in a discussion about how these texts might be staged today.

The ill-fated history of the Royal House of Thebes—Oedipus, the king; his wife, Jocasta; her brother, Creon; and all of their respective cursed offspring—preoccupied the great writers of ancient Greece and Rome, who recounted their fortunes over and over again in many versions. Author Kenneth Cavander, director Casey Stangl, and the actors of Antaeus Company have distilled the legends of three generations into a single evening of drama focused on the figure of Oedipus.

The Vesuvius Prophecies
A trilogy of new plays by Tom Jacobson
Directed by Michael Michetti
November 3–4, 2012

One smoldering volcano, two bickering families, three ingenious plays, and a span of nearly two thousand years: these are all elements of Tom Jacobson's new dramatic trilogy. As the stories unfold, past meets present in a mysterious Roman villa overlooking the ancient city of Pompeii.

One of America's leading experimental theater ensembles presented its current work-in-progress, a new version of Euripides' timeless meditation on suffering and survival. In the ruins of their city, the royal women of Troy, awaiting enslavement and exile, must choose between death and life. Directed by Anne Bogart; Adapted by Jocelyn Clarke. For adult and teen audiences.

The playwright Aristophanes lived to see Aeschylus, Sophocles, and Euripides—his three older contemporaries—dead and buried. In this typically irreverent satire, Dionysus, the god of theater, depressed by the state of the Athenian stage, resolves to restore literary excellence to the seasonal dramatic festivals. Descending to Hades with his slave Xanthius, Dionysus vows to return to Earth with the greatest dead playwright of them all.

But just who is the greatest playwright? And how will the god of wine convince the powerful lord of the Underworld to release the famous deceased author? Hilarity ensues, as a large chorus of singing frogs becomes involved…

Euripides' rarely performed comic play is based on a dazzling and outrageous conceit: that Spartan Helen has passed the entire Trojan War living chastely in Egypt, hidden and protected by the gods, and that only a counterfeit phantom of herself was abducted to Troy, thus provoking ten years of calamity for both sides.

Seven years after the war's end, Helen remains stranded in Egypt, the most hated woman in the world, but oblivious to her infamy and ignorant of the war's outcome and the fate of her husband, Menelaus. The action of the play unfolds on the day that word reaches Helen of what has transpired in Troy, and that the shipwrecked Menelaus is washed up in rags on the Egyptian shore.