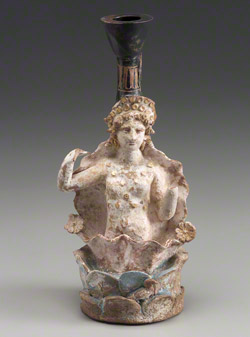 Oil Jar in the Shape of Aphrodite at Her Birth, Greek, 380–370 B.C. Terracotta, pigment, and gold, 8 3/8 in. high. Museum of Fine Arts, Boston. Catharine Page Perkins Fund
While Homer describes Aphrodite as the daughter of the deities Zeus and Dione, Hesiod tells of her marine birth from the severed genitals of the primordial god Ouranos. The oil jar at right elegantly illustrates her emergence from the sea.

The conflicting tales reveal Aphrodite's obscure origins. She was not native to early Greek religion but seems to have developed over centuries, influenced by a variety of Near Eastern goddesses such as the Sumerian Inana, her later Akkadian manifestation as Ishtar, and the Phoenician Astarte. These divinities were associated with power, fertility, and war, and were characterized by fierce jealousy and aggressive sexuality.

In the long and complicated process of Aphrodite's genesis, Cyprus was fundamental. Famed for its copper, the island was a crossroads of cultural interaction and traditions around a local fertility goddess were reshaped by encounters with Near Eastern deities.

The figurine shown below left—typical of those that would have been offered to the local goddess on Cyprus—demonstrates such influences: the nudity and breast-holding gesture are typical of much earlier Near Eastern figures, and make clear the importance that was ascribed to fertility and sexuality.

Over time, Greeks engaged with the Cypriot goddess and adapted her into what would become Aphrodite—although her identity remained complex and, in many cases, acquired regional particularities.

Aphrodite remained particularly important on Cyprus, especially at her sanctuary at Paphos. On the head shown below right, the extent of the goddess's power is suggested by the satyrs and maenads that romp around the rosette-decorated columns on the crown. Their presence highlights Aphrodite's links to vegetal fertility and wild nature.

Adorning the columns are heads of the Egyptian goddess Hathor, recognizable by her wiglike hairstyle. Associated with love and motherhood, this deity was adopted by the Phoenicians along the Levantine coast in connection with their goddess Astarte. Her presence on this head again testifies to the Near Eastern elements that contributed to Aphrodite's identity at Cyprus. 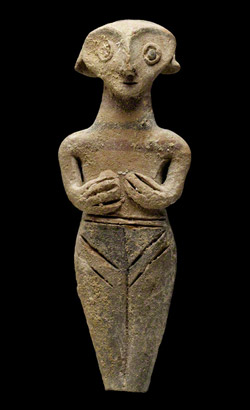 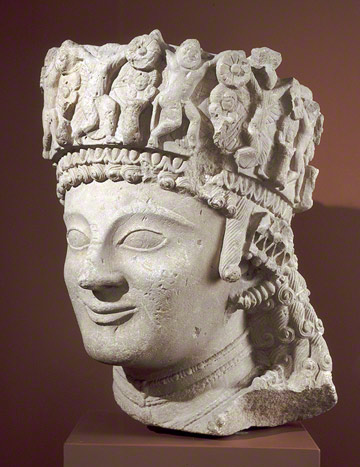