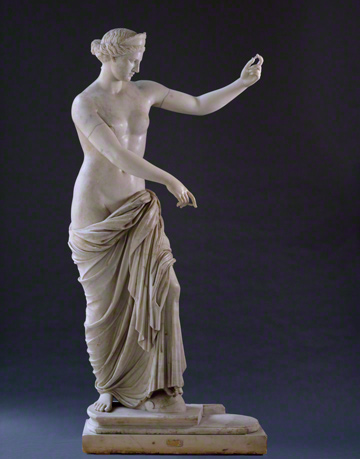 Venus (The Venus of Capua), Roman, A.D. 117–138. Marble, 87 in. high. Soprintendenza Speciale per i Beni Archeologici di Napoli e Pompei. Museo Archeologico Nazionale di Napoli. Image © www.pedicinimages.com
Worship of Aphrodite continued throughout the Roman period. Known as Venus, she came to symbolize Rome's imperial power. Like her Greek counterpart Aphrodite, Venus was intimately associated with love and beauty, yet other elements were distinctive to the Roman goddess.

Venus's first temples were erected in Rome during the 200s B.C. to solicit her assistance in battles, and individual leaders later allied themselves with the deity. Julius Caesar and his heir, Augustus, forged particularly explicit ties to Venus, claiming descent through her son, the Trojan hero Aeneas. The goddess was repeatedly represented in civic architecture and on coins, and her attractive figure became symbolic of Roman power throughout the empire.

The statue at right was discovered at the amphitheater in Capua, in southern Italy. It is the largest example of a sculptural type that derives from a now-lost cult statue of Aphrodite in Corinth. Originally displayed holding a shield, the goddess stood for the desirability of military success and civic peace. Combining sexual allure and martial symbolism, the Venus of Capua evokes the Greek past, yet also bears new resonances in its Roman civic context. 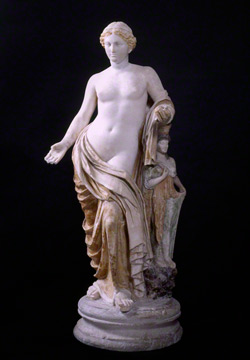 Depictions of Venus were also plentiful in domestic settings, and many examples have been found in Pompeii. Many were displayed in gardens, appropriate to the goddess's deep-rooted connections with vegetation and fertility, as well as her connotations of pleasure.

This large sculpture was discovered in an outdoor niche, whose back wall was painted to suggest a hanging blue fabric. Leaning on a statuette, Venus holds her regular attribute, an apple. The original pigments are well preserved, accentuating her naked flesh. The holes in her ears indicate that she once wore earrings. 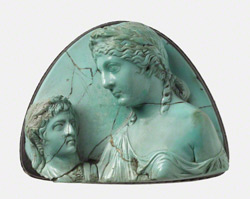 In Roman religion, Venus acquired a more matronly character than Aphrodite, and empresses were regularly identified with her. Denoting wifely virtues of fertility and decency, Venus's figure types were used for portrait sculptures of both imperial and citizen women.

This gem depicting Livia, wife of Augustus, demonstrates a way in which the Roman imperial family presented links to their mythical ancestor. The empress's gown slips off one shoulder in a manner that evokes images of the goddess (such as this silver and gold statuette and this figure adorned with an earring, also on view in the exhibition), as does her hairstyle. Thus depicted in the guise of Venus, Livia is presented as a model wife and mother. She holds a male portrait bust, identified as either the deified Augustus, her deceased son Drusus, or Augustus's heir, Tiberius.