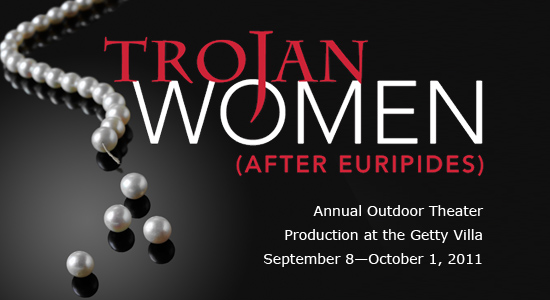 Each fall, this series features a classical tragedy or comedy in the Getty Villa's dramatic Barbara and Lawrence Fleischman Theater, a classical outdoor theater based on ancient prototypes.

SITI Company, one of the country's leading theater ensembles, performs the world premiere of a new Getty-commissioned production, directed by Anne Bogart and adapted by Jocelyn Clarke. In the ruins of their burning city, the royal women of Troy—still mourning the slaughter of their husbands and sons—await enslavement and exile. Among the greatest of all antiwar dramas, the play is a timeless meditation on the moments of individual choice that separate death and life, despair and hope, future and past.


About the Artists
SITI Company is an ensemble-based theater company whose three ongoing components are the creation of new work, the training of young theater artists, and a commitment to international collaboration.

SITI was founded in 1992 by Anne Bogart and Tadashi Suzuki to redefine and revitalize contemporary theater in the United States through an emphasis on international cultural exchange and collaboration. Originally envisioned as a summer institute in Saratoga Springs, New York, SITI has expanded to encompass a year-round program based in New York City with a summer season in Saratoga. SITI believes that contemporary American theater must necessarily incorporate artists from around the world and learn from the resulting cross-cultural exchange of dance, music, art, and performance experiences.

Additional information about SITI Company can be found at www.siti.org.

Read more about the play on our blog, The Iris.


Watch an interview with director Anne Bogart, playwright Jocelyn Clarke, and cast members Ellen Lauren and Leon Ingulsrud. They discuss why completing this production of Trojan Women in their 20th anniversary year has such a deep connection and meaning for the SITI Company.


Watch part two of this interview.

Watch the third and final segment of our Trojan Women video interview series.