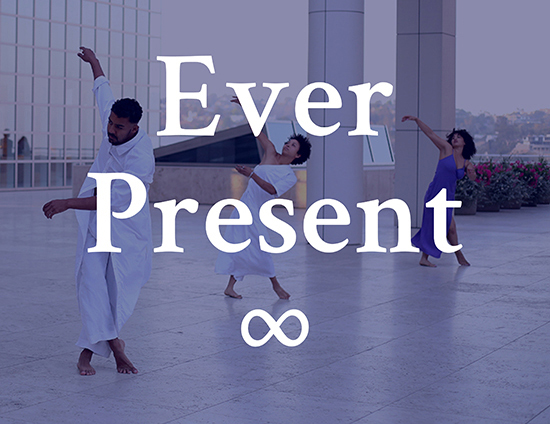 Ever Present is a new series that invites artistic experimenters to stage ephemeral performances amid the permanent collections, architecture, and gardens of the museum.


Walk through the garden created by artist Robert Irwin at the Getty and your feet will cross two stones in the path engraved with this message:
Ever present / Never twice the same / Ever changing / Never less than whole


This series takes Irwin's words as an invitation to explore concepts of temporality and permanence through the work of musicians, artists, dancers, and other cultural vanguards. Featuring innovative and irreverent experiences, Ever Present aims to question the link between what lives and what lasts.


Always free and open-ended, Ever Present occurs throughout the year.

Join us for a rare 16mm screening of Laura Mulvey and Peter Wollen's 1982 film Crystal Gazing. Featuring original music and starring Lora Logic of the legendary punk band X-Ray Spex, this film traces the intersecting lives of four cultural workers trying to make their way in London during a time of economic precarity.

Perhaps best known for their work as groundbreaking film theorists, Laura Mulvey and Peter Wollen also made a series of essay-like independent films that engaged with developing feminist and avant-garde cinematic techniques, while collaborating with some of the leading artists of the 1970s and 80s.

Crystal Gazing is their most wistful and narrative-driven film–a Godard-esque dry comedy that also serves as a time capsule of London's intelligentsia amid the harsh backdrop of the Thatcherite recession. Littered with imagery of electronic media, puzzling artworks, and countercultural sites, the film follows a saxophonist who goes from street busking to a televised pop star, while the other characters–a PhD student writing his thesis on the fairytales of Charles Perrault, an unemployed science-fiction illustrator, and an analyst of space photography–are all linked in their search for utopia, while unable to help peering into a dim future.
__

"It's about the contrast between the 1960s and the 1980s. But that was one aspect of the original script which diminished tremendously–the project was very much taken over by events here and now. As we actually made the film, the moment of making it became more and more important–we wanted to inscribe the present, Thatcherism, cuts, unemployment into it." -Laura Mulvey in an interview with Frameworks, Issue 19, 1982.

"One of the most lucid and poignant allegories of the utopian sensibility." -Adrian Martin

"[An] effervescent and largely successful black comedy..it's great to see the Left dancing so wittily on the graveyards of past and present." -City Limits (UK)

This event is co-presented by the Getty's Ever Present series and Mezzanine.

Recently in the series

October 29, 2022
Choreographer Marjani Fort&eacute-Saunders presents a tribute to renowned dancer Blondell Cummings (1944–2015) that evokes the celestial and miraculous figure of the unicorn. Performed by an ensemble of dancers in the Central Garden, Fort&eacute-Saunders brings her own choreography into conversation with Cummings's signature work, Chicken Soup, first performed in 1981. Mirroring Cummings's alchemical transformation, Fort&eacute-Saunders weaves movement, sound, and media to offer historic and personal narratives as embodied tales of lineage, unabated love, and warriorship.

October 8 & 9, 2022
Choreographer Milka Djordjevich and visual artists Victoria Fu and Matt Rich collaborate on an original performance for the Getty Center. Djordjevich and dancers perform throughout the site with Fu and Rich's wearable artworks.

April 30, 2022
Eight artists present performances imbued with both beauty and urgency, a hallmark of life during these unsettled, dissonant days. Sonic and movement-based moments unfold throughout the afternoon at various locations across the Getty Center. Offering a spectrum of strategies that include noise, synthesis, improvisation, and the abstraction of traditional forms, these artists both reflect and complicate the serenity of their surroundings. Part of Ever Present, an ongoing experimental series that brings contemporary performance into the Getty's architecture and gardens.

December 4, 2021
Contemporary experimental musicians, dancers, and artists gather for an afternoon-long exploration of Fluxus scores drawn from the landmark 1963 publication An Anthology of Chance Operations. Edited by minimalist composer La Monte Young and poet Jackson Mac Low, and designed by George Maciunas, this seminal book drew together radical ideas for new forms of art and performance from a coterie of artists who would come to define the Fluxus art movement.

September 27, 2021
Moor Mother (Camae Ayewa) designs a unique evening of music, language, and imagery set among the Getty's outdoor architectural spaces that pulls together various aspects of her multidimensional practice as musician, poet, visual artist, and educator, featuring contributions from her network of friends, collaborators and co-conspirators.

August 21 & 22, 2021
The Ever Present series returns with a unique listening experience in Robert Irwin's Central Garden featuring Refuge, an album of new ambient music by Devendra Banhart and Noah Georgeson. Streaming through a custom sound system set up throughout the Central Garden's circular pathways, music will be looping throughout the weekend to make room for meandering and contemplation. Relax on the lawns with a picnic, grab a bench, or wander among the blooming garden beds as the sonic vibrations clear the air for a new era.

August 28–September 1, 2020
Join us online for the premiere of Free Fall for the Camera, a new short film by artist Brendan Fernandes. In this film, an ensemble of dancers create kaleidoscopic moments that serve as remembrances of the lives lost in the tragic 2016 mass shooting at Pulse nightclub in Orlando, which targeted the Latinx and LGBTQ+ community. After the screening, Fernandes discuss the project with Joshua Chambers-Letson, a writer and performance theorist from Northwestern University.

April 4, 2020 (Canceled as part of Getty's response to coronavirus (COVID-19)
Electronic musician Holly Herndon and her ensemble presage a sonic future that connects human and machine to realize new definitions of beauty. Her dance-inflected experimental music investigates the nature of humanity in the digital age–including her 2019 album PROTO, made in part with artificial intelligence. Drawing from folk traditions of East Tennessee, Berlin's radical club culture, and her Stanford graduate studies on machine learning and music, Herndon's complex and riveting music promises a unique sunset performance on the Getty's outdoor stage.

September 7, 2019
Celebrate California plant culture with a special program inspired by 1970s Los Angeles and Plantasia, the iconic album made for plants and the people who love them. Worldwide curiosities guide Atlas Obscura and Brooklyn's Sacred Bones Records teams up with the Getty's Ever Present series to delve into the plant-centric cultural movement behind Mort Garson's cult-classic electronic 1976 album Mother Earth's Plantasia. Join us for a day filled with music, workshops, and presentations that explore the influence of plants on art and culture in Los Angeles.

July 28, 2019
For this Sunday event, New York and Berlin-based composer and artist Colin Self—known for combining voice, body, and digital technologies to explore gender, communication, and our relationships to the biological and the technological—performs on the Tram Arrival Plaza. L.A. native Mandy Kahn is a noted poet and librettist who also collaborates with composers on inventive new works, such as Yuval Sharon's celebrated opera Hopscotch. Kahn presents a selection of immersive pieces that interact with the architecture of the Getty courtyards and feature a cast of singers and performers. Composer Ben Babbitt, known for work with Weyes Blood, Angel Olsen, and How to Dress Well, creates a multi-channel sound installation for Robert Irwin's Central Garden, with live singers and a quadrophonic ambient soundtrack.

July 13, 2019
Inspired by the exhibition The Wondrous Cosmos in Medieval Manuscripts, Ever Present brings together a group of artists who integrate the intergalactic into their varied work. Like their medieval forbearers, they quest for new artistic, analytic, and spiritual ways of understanding our connection to the cosmos. Performances include music by vocalist, multi-instrumentalist, and Vedic astrologer Deradoorian (known for her work with Dirty Projectors), choral scores translated from the constellations by experimental artist and composer Carolyn Pennypacker Riggs, an interdimensional ritual by A.S.T.R.A.L.O.R.A.C.L.E.S with live music accompaniment by ambient composer Ana Roxanne, a planetarium-style visual lecture on the multiverse by artists Jennifer Moon and laub, and site-wide energy work by multidimensional artist and Afrofuturist Jordi.

May 25, 2019
Join electronic composer Kaitlyn Aurelia Smith in the lush environment of the Central Garden for a unique guided meditation experience set to the sounds of her album Tides: Music For Meditation And Yoga. Raised on Orcas Island off the coast of Washington state, Smith's compositions are surreal yet rooted in nature. A series of breakthrough experimental albums utilizing the Buchla 100 synthesizer—an instrument that allowed her to combine the organic elements of her upbringing with the technological prowess gained from her studies at Berklee College of Music—earned Smith international acclaim by the likes of Pitchfork, NPR, Rolling Stone and SPIN. After several world-wide tours that brought her from major European festivals to the Hollywood Bowl, Smith found inspiration composing music for a more understated context: her mother's yoga practice. Nine tracks of densely layered prismatic tones are interwoven with field recordings of natural sounds for a music that ebbs, flows, and connects the listener to frequencies both environmental and internal.

Designed to be interactive, this hour-long guided meditation to the album is not a performance, but an experience. Feel free to bring your own yoga mat or blanket for the grass surface. A limited number of yoga mats will be provided. Opening set by Cool Maritime and Emily Sprague.