Urban Networks
The daring expansion of Los Angeles's water and power infrastructure, the aggressive implementation of its pioneering freeway plan, and the strategic development of its major transportation hubs all fueled the metropolis's phenomenal growth. The urban networks of Los Angeles were the foundation of the region's transformation into a global powerhouse. 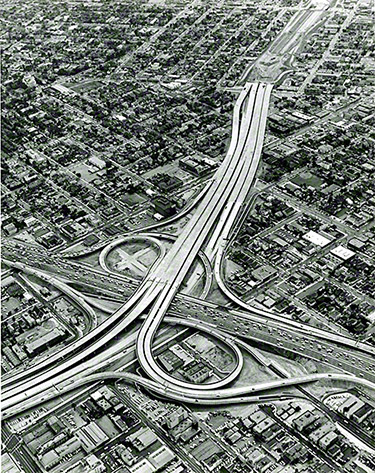 By 1940, there were over one million cars on L.A.'s roads. Residents' embrace of motorized living resulted in the need for a new transportation network unimpeded by surface-street congestion. "Motorway" solutions, promoted at the 1939 New York World's Fair, promised intelligently designed systems based on the four principles of safety, comfort, speed, and economy.

California's first major high-speed roadway was the Arroyo Seco Parkway (formerly called the Pasadena Freeway), completed in 1940. A comprehensive freeway master plan adopted in 1947 was based on early trails and roads as well as the extensive routes of the Pacific Electric Railway, which automobiles helped make obsolete. Voter-approved gasoline taxes introduced in 1947 and the Federal-Aid Highway Act of 1956 accelerated the construction of the county's 527-mile network, including the Santa Monica Freeway and Harbor Freeway, seen in the image at the right.

Civic leaders promoted the freeway system as a beneficial and efficient means of uniting the metropolis. Property owners in the path of these monumental roadways, however, experienced harsher realities. Freeways divided communities and escalated health concerns related to car emissions.

Los Angeles's public transportation system has been a source of fascination and frustration for generations. Established by real-estate developer Henry Huntington, the Pacific Electric Railway was once the largest interurban rail system in the world. Yet escalating levels of automobile ownership, longer riding times due to traffic, deferred maintenance, and declining profitability all contributed to its demise in the 1950s. 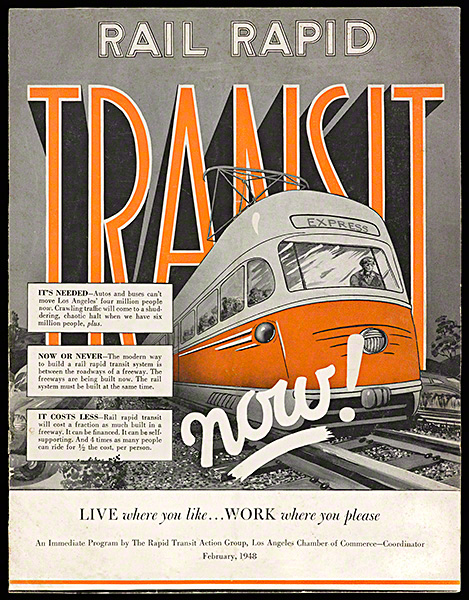 Plans were constantly devised, though not always implemented, for experimental mass-transportation strategies, including elevated bus lines, monorails, and transit-oriented developments, such as Rail Rapid Transit. The economic and psychological toll of increased traffic, as well as L.A.'s greater density, made improved mobility an urgent civic need. In 1990, L.A. County purchased the remaining rail right-of-ways from the Southern Pacific Transportation Company, laying the foundation for the light-rail, subway, and rapid-bus networks constructed in the region over the last decades.

Considered the first airport of the jet age, Los Angeles International Airport (LAX) is a prime symbol of L.A.'s drive to become one of the globe's most vital gateways. A decade of planning was required before the initial phase of construction was completed in 1961—anchored by the iconic, gravity-defying arches of the Theme Building.

The airport's experimental scheme was the earliest of its kind to use a satellite terminal system, in which passengers walked from airline ticketing areas through underground tunnels, and emerged via escalators into distinct departure pavilions located adjacent to the runways. The master plan was also designed to accommodate future expansion.

Voracious demand for water and power was a fundamental driving force behind L.A.'s expanding geographic, political, and economic influence.

After the Los Angeles River and local aquifers were depleted in the early 1900s, elaborate remote networks were constructed to import water to the region. Originating in the Owens Valley in eastern California, the 223-mile Los Angeles Aqueduct began serving the city in 1913. The Hoover Dam's 266-mile electrical transmission line and the 242-mile Colorado River Aqueduct were both completed in the 1930s. 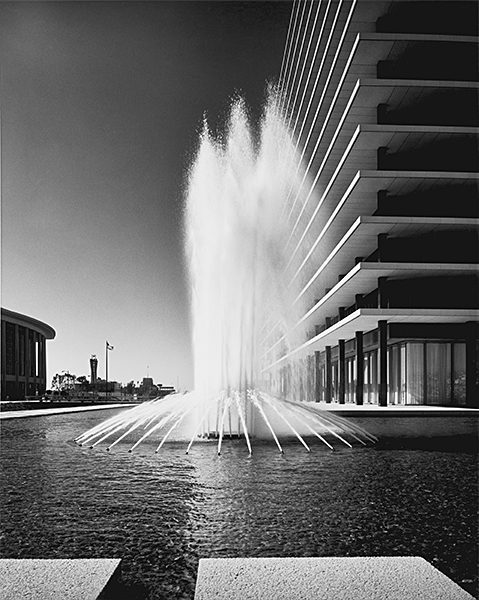 The headquarters for the Los Angeles Department of Water and Power was designed with intelligent systems that elegantly promote the utility's services. The structure is surrounded by a reflecting pool with eight splashing fountains, which circulate water used for the building's air-conditioning. Office lights were originally left on overnight to not only transform the facility into an alluring civic lantern but also produce enough radiant heat to warm the interior. The 1973 oil crisis, however, made this method appear wasteful, forcing a more standard approach for climate control.