Discover (and eat) one of the world's most ancient writing forms

Imagine you are a young Mesopotamian scribe about to uncover the mysteries of cuneiform, the earliest known writing system. But instead of writing on a traditional clay tablet, you get to practice cuneiform on a cookie tablet. Follow our simple recipe and practice basic pictographs and cuneiform words to create your own tasty tablets in this family friendly activity. Ancient history never tasted so good!

Cuneiform (cyu-nay-i-form) meaning "wedge-shaped," is a writing system invented around 3000 BC by the Sumerian people in ancient Mesopotamia (roughly, modern Iraq). It was used for thousands of years to communicate multiple languages.

Cuneiform was originally designed with available materials in mind: clay for tablets and reeds for writing tools. Over time, scribes also wrote with other tools on stone, bronze, and organic materials. 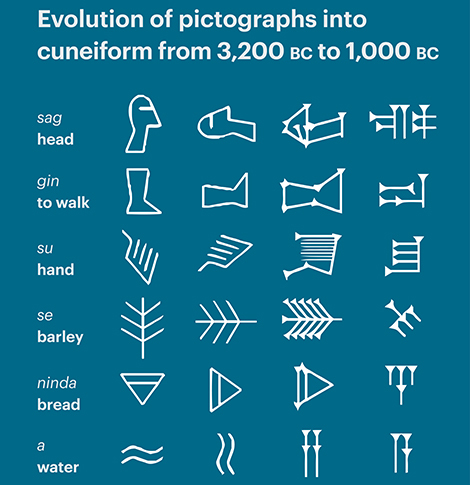 Before inventing cuneiform, Mesopotamians made tiny clay objects to record and count things. These objects evolved into word pictures (pictographs) drawn on clay tablets. Finally, scribes began to press wedge shapes into clay using the triangular top corner of a cut reed. These wedges were easy and efficient and, eventually, the writing system became more abstract. Cuneiform went through many changes across time. This chart (at right) provides a simplified illustration drawn from different cultures.

Ancient scribes started to learn to write as children, possibly as young as seven years old. At first, they practiced pressing single wedges: vertical, horizontal, and diagonal, then graduated to grouping them into signs signifying syllables and words. Good scribes studied for many years, learning hundreds of signs. Some became important officials in the royal court.

Now it's your turn to try making pictographs and cuneiform words. Don't worry about getting them perfect. Ancient scribes had a lot of practice. That means a lot of cookies for you and your family!

Choose a pictograph from the downloadable Cuneiform and Pictograph PDF.