Secession
In 1897 Klimt led a group of young Austrian artists and architects who resigned from the Vienna Künstlerhaus (Artists' house), the exhibition venue dominated by established academic artists. Calling themselves the "Secession," they set out not only to revolutionize the visual arts, but all of aesthetic life.

By 1898 the Secessionists had begun their own periodical, Ver Sacrum ("Sacred Spring"), and erected their own exhibition hall, where they showcased their own art and brought international avant-garde art to Vienna. During the early years of the Secession, Klimt's style and philosophical outlook underwent defining change.

Klimt's talent as a graphic designer was especially evident in the early years of the Secession. He was then eschewing three-dimensional space and developing an increasingly linear and planar mode of representation, inspired by the linearity and raw power of Greek vase painting and Japanese woodcuts. 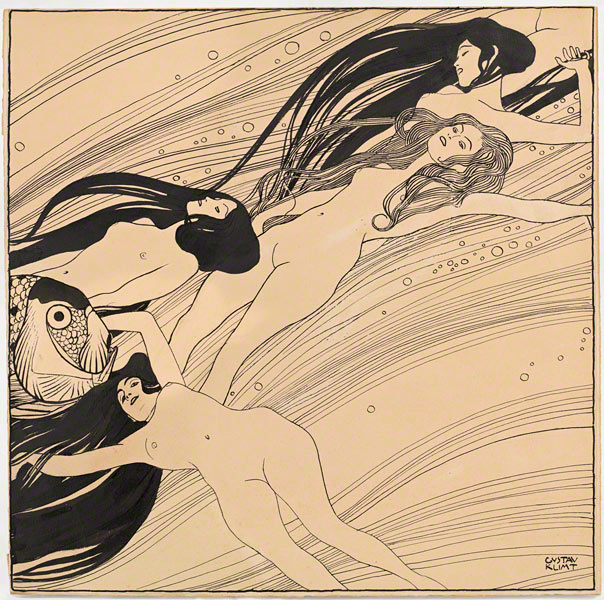 Study for the Portrait of a Young Woman Reclining on a Chaise Lounge, 1897–98, Black Chalk. The J. Paul Getty Museum

Update Required To play the media you will need to either update your browser to a recent version or update your Flash plugin.
Stylistically, the drawing above is characterized by a soft focus, which reflects Symbolism's influence on Klimt. He shows a pretty young woman from a close vantage point, as she relaxes on a couch and gazes languidly outward. Her head and the top of the couch occupy nearly the whole of the picture plane. Her ovoid face with its cloud of hair is at once captivating and vague and is further set off by the high collar of her dress. The flat couch back accentuates the physical and psychological barrier between the viewer and this dreamy beauty.

The new Vienna University opened in 1884. Klimt and his colleague Franz Matsch, with whom he had worked at the New Burgtheater, were commissioned to make the ceiling paintings for the university's grand reception hall. Matsch was to paint the centerpiece, The Triumph of Light over Darkness, and the corner painting representing the faculty of Theology. Klimt was to execute the three other Faculty Paintings representing Philosophy, Medicine, and Jurisprudence. 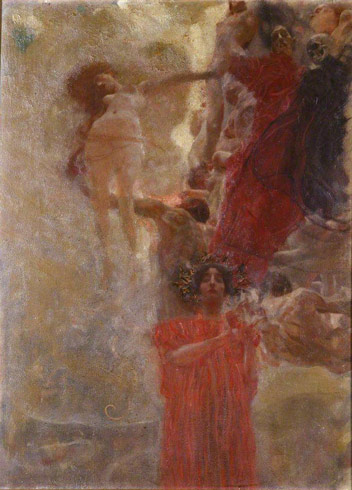 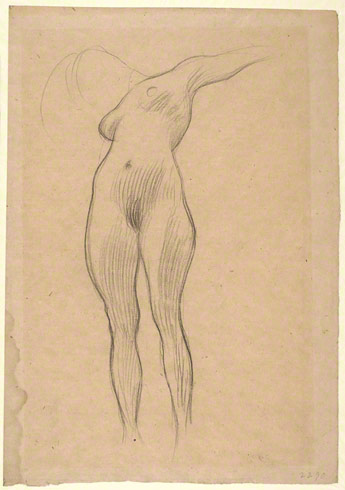 No longer able to work in straightforwardly representational terms, Klimt developed a cosmic vision for these paintings of floating figures delivered up to a fate that was out of their control. He developed a radical approach to the nude, rejecting the fleshy three-dimensional beauty of the classical nude in favor of what may be called "nakedness," pointing to the elemental isolation and stark realities of the human situation. Scandalized by the nudity, the university rejected Klimt's paintings, and they were never hung.

In the oil sketch for Medicine, above left, Klimt placed Hygieia, goddess of medicine, at the bottom. Behind her is the stream of suffering humanity containing figures, including Death at the top right. To the left is a floating female nude, while a muscular man shown from behind extends his arm to support her. The oil sketch shows traces of Klimt's earlier academic style in the curvaceous forms of the figures and the dramatic lighting of the stream of humanity.

The floating woman preoccupied Klimt as he worked and reworked Medicine in drawings, such as the one above, right. His main interest was in streamlining her form so that she seemed to levitate effortlessly in a dream state, which is emphasized by his trailing out the lines and omitting her feet and hands. This floating woman is at once seductive and mysterious, sensual and yet unreal.

Gustav Klimt: The Magic of Line
By Marian Bisanz-Prakken

Learn more about celebrations for Klimt's 150th birthday (links to the city of Vienna website).