These events complement the exhibition Cave Temples of Dunhuang: Buddhist Art on China's Silk Road, on view at the Getty Center from May 7 to September 4, 2016.

Dunhuang, China, figured prominently in linking diverse civilizations across Eurasia during the Tang dynasty (618–907 CE). Professor Victor H. Mair discusses this center of Buddhist religion and art and its role in facilitating the flow of economic goods and cultural influences among peoples of many different ethnic and linguistic backgrounds.

This two-day symposium features more than 20 international scholars whose presentations on the Mogao Grottoes explore the unique confluence of historical perspectives, spiritual content, artistic practice, and innovative approaches to conservation. Sessions address the media of wall paintings and manuscripts as well as the iconographic themes of the caves, particularly their deep and layered Buddhist content.

Please note: This is the first day of a two-day symposium, taking place at the Getty Center and University of California, Los Angeles (UCLA). A separate reservation is required for each day.

Join master musicians and scholar-performers from the University of California for a musical journey through the cultures that came together to shape the Dunhuang caves and that are illustrated in the wall paintings. Musical traditions from China, India, the Middle East, and Central Asia will bring the Silk Road vibrantly to life.

Presented in collaboration with the World Music Center at UCLA and the UCLA Confucius Institute.

Susan Whitfield, the director of the International Dunhuang Project, takes us on a journey of exploration of the many facets of the Diamond Sutra (a sacred Mahayana Buddhist text), which dates from 868 and is the world's oldest dated complete printed book.

Navigate the myriad cultures of the Silk Road and beyond in this family festival inspired by the exhibitions Cave Temples of Dunhuang: Buddhist Art on China's Silk Road and Traversing the Globe Through Illuminated Manuscripts. With hands-on workshops and interactive events, you can make your own book, write Chinese characters, witness the beauty of calligraphy from the Middle Kingdom, be entranced by stories of Buddha in animal forms, and feel the world's interconnectedness through music and dance from China to Iran.

Children's author Cornelia Funke reads her latest story about William Dampier—pirate, adventurer, explorer, and ghost—and his encounters with other ghosts and spirits at the Getty Center. Following the reading is a book signing with the author.

Recommended for families and kids ages 8 and up.

Drawing on the scrolls, paintings, and texts from Dunhuang, John Kieschnick, The Robert H. N. Ho Family Foundation Professor of Buddhist Studies at Stanford University, will discuss the introduction of the concepts of karma and rebirth into China and how these scrolls and paintings can be viewed as records of donations made in memory of a deceased family member.

Musicians from the Silk Road Ensemble will be out and about the Getty Center creating musical events inspired by the exhibition Cave Temples of Dunhuang: Buddhist Art on China's Silk Road. Visitors will have an opportunity to engage with Ensemble artists and learn about their creative processes.

Multifaceted composer and conductor Tan Dun—inspired by Dunhuang and especially the cave temple wall paintings at Mogao, which depict more than 40 types of musical instruments—is at work on a new symphonic commission. This evening will offer a rare opportunity to hear Tan Dun discuss his creative process as a musician and composer as well as a musical performance featuring inspirations and demonstrations of his current research.

This event is made possible by the generous support of the Dunhuang Foundation.

In the year 1000, dramatic cultural and political changes were underway in major regions of the world, including East and Central Asia. At Dunhuang, this was when the Library Cave (Cave 17) was sealed. Using the cave's contents as clues—some 40,000 objects, including manuscripts on spiritual, medical, philosophical and mundane matters, as well as paintings and textiles—Valerie Hansen, professor of history at Yale University, will reconstruct the larger historical context of the Library Cave, the caves of the Thousand Buddhas at Mogao, and city of Dunhuang, and the surrounding region.

For more than 20 years, theater and opera director Peter Sellars has been studying the Vimalakīrti Sutra—a 1st century AD allegorical text of Buddhist teachings, scenes of which are well-represented in the Dunhuang cave temples—and is collaborating with artists, composers, and Buddhist scholars to stage a full-scale production that is anticipated to premiere in 2020. At the Getty, Sellars will be joined by Robert Thurman, the Jey Tsong Khapa Professor of Indo-Tibetan Buddhist Studies in the Department of Religion at Colombia University, for a discussion about Dunhuang and the Vimalakīrti Sutra as sources of inspiration for artists and for Sellars' forthcoming production.

In 1927 Chinese film pioneer Dan Duyu made what is believed to be the first screen adaptation of one of the most enduring classics of Chinese literature, Journey to the West. Dan's The Cave of the Silken Web, once thought lost, was rediscovered in 2011 and preserved by the National Library of Norway.

This rare cinematic treasure will have its Los Angeles premiere in a special outdoor event at the Getty Center with the Silk Road Ensemble performing original music alongside the screening of this classic silent film.

The Care of Time and the Dimensions of Conservation at the Mogao Grottoes
Lecture by Neville Agnew
Sunday, August 28, 2016
4:00 p.m.
Harold M. Williams Auditorium, Getty Center

For more than 25 years the Getty Conservation Institute (GCI) has collaborated with the Dunhuang Academy to preserve the Mogao Grottoes, a UNESCO World Heritage site. Neville Agnew, GCI principal project specialist, will provide an overview of this partnership and describe the wide spectrum of activities that were undertaken. 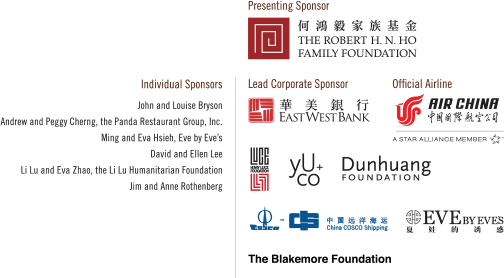