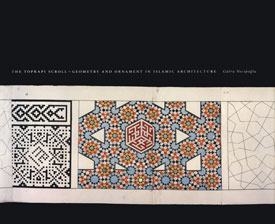 The Topkapi Scroll: Geometry and Ornament in Islamic Architecture

Since precious few architectural drawings and no theoretical treatises on architecture remain from the premodern Islamic world, the Timurid pattern scroll in the collection of the Topkapi Palace Museum Library is an exceedingly rich and valuable source of information. In the course of her in-depth analysis of this scroll dating from the late fifteenth or early sixteenth century, Gülru Necipoğlu throws new light on the conceptualization, recording, and transmission of architectural design in the Islamic world between the tenth and sixteenth centuries. Her text has particularly far-reaching implications for recent discussions on vision, subjectivity, and the semiotics of abstract representation. She also compares the Islamic understanding of geometry with that found in medieval Western art, making this book particularly valuable for all historians and critics of architecture.

The scroll, with its 114 individual geometric patterns for wall surfaces and vaulting, is reproduced entirely in color in this elegant, large-format volume. An extensive catalogue includes illustrations showing the underlying geometries (in the form of incised “dead” drawings) from which the individual patterns are generated. An essay by Mohammad al-Asad discusses the geometry of the muqarnas and demonstrates by means of CAD drawings how one of the scroll’s patterns could be used co design a three-dimensional vault.

Gülru Necipoğlu is the Aga Khan Professor of Islamic Art and Architecture at Harvard University. She specializes in the arts and architecture of the pre-modern Islamic lands, with a focus on the Mediterranean. Necipoğlu edits the journal Muqarnas: An Annual on the Visual Cultures of the Islamic World and her books include: Architecture, Ceremonial and Power: The Topkapı Palace (1991), The Topkapı Scroll–Geometry and Ornament in Islamic Architecture (1995), and The Age of Sinan: Architectural Culture in the Ottoman Empire (2005, 2011). Professor Necipoğlu is an elected member of the American Philosophical Society, the American Academy of Arts and Sciences, and the Centro Internazionale di Studi di Archittettura Andrea Palladio in Vicenza.

“Featuring elaborate star-and-polygon patterns, the Topkapi scroll, probably made in Persia in the late 15th or early 16th century, was a manual of architectural designs used in complex vaults, geometric ornaments, mosaic tiles and polychromatic masonry. In this scholarly, sumptuously illustrated study, the scroll, preserved in Istanbul’s Topkapi Palace Museum, serves as a point of departure for Necipoğlu’s history of Islamic architectural drawing and her trenchant critique of European ‘orientalist’ assumptions about Islamic culture. Professor of Islamic art and architecture at Harvard, Necipoğlu maintains that a shared classical heritage in the Latin West, Byzantium and the Islamic world was remodeled in each civilization by differing monotheistic traditions. She argues that Islamic geometric patterns, often dismissed as mere decoration, comprised a ‘sign system’ reflecting religious and ideological currents, mathematical and scientific advances and mystical beliefs throughout premodern Islamic history.” —Publishers Weekly

“This sumptuously produced volume by the Aga Khan Professor of Islamic Art and Architecture at Harvard examines the Timurid pattern scroll preserved in the Topkapi Palace Museum Library in Istanbul. Since few architectural drawings or theoretical texts survive from the premodern Islamic world, this scroll is a very important source of information. Dating from the late 15th or early 16th century and featuring 115 geometrical patterns, the scroll is shown here in its entirety in clear and well-produced illustrations. The author’s analysis sheds new light on the transmission of Islamic architectural design between the tenth and 16th centuries. She also compares Islamic concepts with those found in medieval Western art. Though the volume is intended for the specialist, it will be of interest to anyone familiar with Islamic architecture. Well recommended for all art collections.” —Library Journal