Lyonel Feininger and Photography
Lyonel Feininger took up the camera at the age of 58 in fall 1928. Despite his early skepticism about this "mechanical" medium, the painter was inspired by the enthusiasm of his sons Andreas and Theodore (nicknamed Lux), as well as by the innovative work of László Moholy-Nagy, a fellow master at the Bauhaus in Dessau, Germany.

Photography remained a private endeavor for Feininger. He never exhibited his prints, publishing just a handful during his lifetime and sharing them only with family and a few friends. 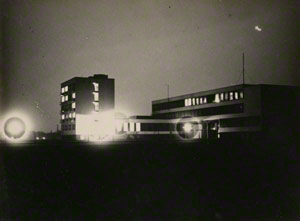 Although Feininger explored many of the experimental photographic techniques being practiced at the Bauhaus, he remained isolated and out of step with the rest of the school. Working alone and often at night, he created expressive, introspective, otherworldly images that have little in common with the playful student photography more typically associated with the school.

Using a Voigtländer Bergheil camera (on display in the exhibition), frequently with a tripod, he photographed the neighborhood around the masters' houses, the Bauhaus campus, and the Dessau railway station, experimenting with night imagery, reversed tonalities, and severe weather conditions. 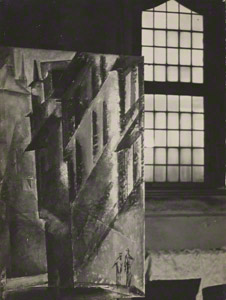 In 1929 Feininger created numerous photographic sketches to prepare for a series of paintings he was commissioned to make of the city of Halle, Germany.

A photograph of Halle included in the exhibition, Untitled (Bölbergasse, Halle), was the basis for one of these paintings, which is now lost. It was perhaps the most inventive and photographic of the Halle series, transforming a view of an unremarkable street into a dramatic, almost abstract composition through tight framing and an unusual perspective. The painting is visible in a 1931 photograph of the artist's studio also included in the exhibition

Feininger also made many photographs of his Halle studio and the paintings he produced there. While many are purely documentary, others are sophisticated compositions that explore formal relationships between a particular painting and the space in which it was created, such as the one shown at right.

Feininger would never again use photography so extensively in connection with his paintings as he did in conjunction with the Halle series. 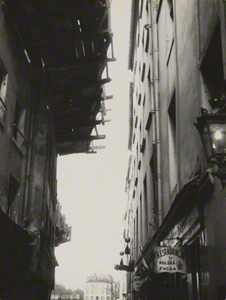 After completing his painting commission in Halle, Feininger spent several weeks in June and July of 1931 in France. In Paris and in the village of Bourron, he created images with his Voigtländer Bergheil camera as well as with his newly acquired Leica (also on display in the exhibition), in which he used 35 mm film for the first time. He also sketched and photographed Brittany on a bicycle tour with his son Lux, capturing views of the architecture and seaside.

In Paris, primed by his recent experience of photographing historic buildings in the streets of Halle, Feininger was drawn to architectural views and urban scenes. On returning from a day trip, he wrote to his wife Julia: "I wandered on foot through the city, flâné! Armed with both cameras, I made photographs...From 'Boul-Miche' I crisscrossed through the Quartier Mouffetard...through all possible old narrow and fabulous lanes and I hope that I snapped some very, very good things. Luckily the 'Leica' functioned flawlessly" (June 16, 1931, Feininger Papers, Houghton Library). 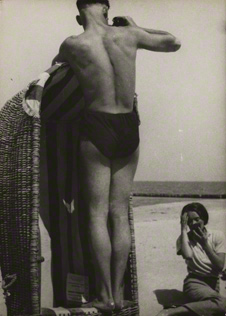 Beginning in 1892 Lyonel Feininger spent parts of his summers on the Baltic coast, where the sea and dunes, along with the harbors, rustic farmhouses, and medieval towns, became some of his most powerful sources of inspiration.

Every summer between 1929 and 1935, he used the camera to document family trips to Deep an der Rega (in present-day Poland), where the beach became a playground for his three athletic sons, Andreas, Laurence, and Lux. Feininger looked forward to his time in Deep and the restorative, transformative effect it always had on him. 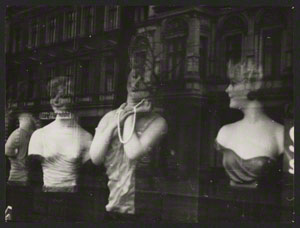 From September 1932, when the National Socialist majority of the Dessau city council voted to close the Bauhaus, through March 1933, when he and his family left for Berlin, Feininger made a series of unsettling photographs that feature mannequins in shop windows. Feininger's images emphasize not only the eerily lifelike and strangely seductive quality of the mannequins but also the disorienting, dreamlike effect created by reflections on the glass.

In the work shown here, the reflection seems to transport the languid central figure—"drunk with beauty" and oblivious to the camera—beyond the confines of the glass.

Feininger came under increasing scrutiny by the National Socialists, who had stepped up their campaign against the avant-garde after rising to power in January 1933. He produced few paintings during this oppressive period, but continued to photograph regularly in spite of having little access to darkroom facilities. In 1937 he and his wife moved to the United States, renting an apartment in Manhattan—marking his permanent return to New York after an absence of nearly 50 years.

In the years that followed, photography remained an important part of Feininger's life, though few prints exist from his time in America.