In his paintings, Wolfgang Paalen sought to merge indigenous Mexican and Pacific Northwest art with visualizations of the world discovered through modern physics. In Paalen's view, this joining of past and present, art and science, was essential to restoring art's centrality to modern life. Though no scientific illustrations appear in Dyn, Paalen's essays refer to Louis de Broglie, Erwin Schrödinger, and other physicists whose work inspired him, and Onslow Ford attested that Paalen was trying to paint the magnificent hidden world physics had revealed.

As demonstrated in Pandynamic Figure, Paalen's paintings draw the viewer into the movement of oscillating waves around the canvas, which suggest swirling reflections of light in a pool or in the sky. One experiences the vibrations as a compulsory movement inside the painting. 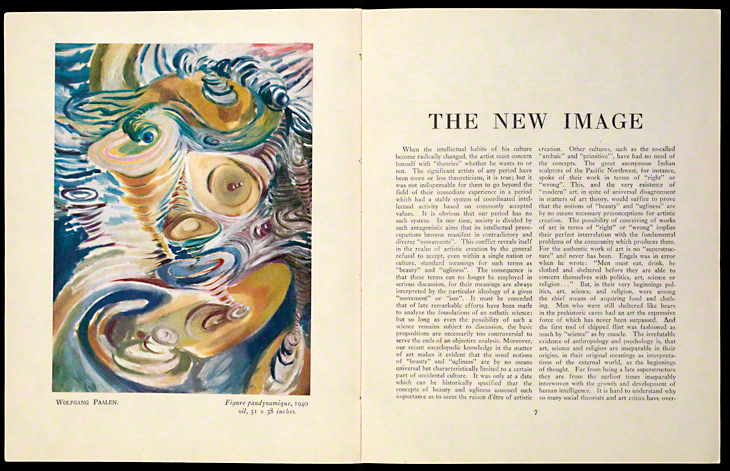 From Artifact to Abstraction 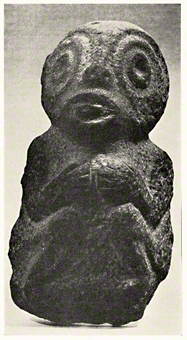 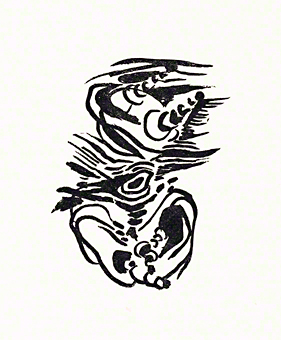 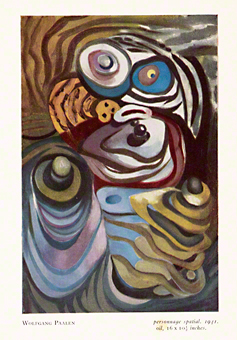 Space Person, 1941, Wolfgang Paalen (Austrian, 1905–1959). From Dyn, no. 3 (1942), after p. 12. The Getty Research Institute, 84-S23. © Succession Paalen, Paalen Archiv, Berlin
Placing Native American art in relation to abstract paintings like Space Person gives a sense of the process that Paalen often engaged in, moving from an artifact in his collection, to a drawing, and then to a painting. The source of Paalen's Space Person may be the small stone figure above. The figure is compressed and focused on the navel, with spirals around the eyes and mouth. The preliminary drawing for Space Person may have been an ink illustration that appears in the first issue of Dyn, which seems also to refer to the stone figure. The figure in the drawing has limbs that spiral toward the viewer. In Space Person, the waves form a crude figure, babylike with a chubby face and limbs, bug eyes, a grimace, and stubs for hands and legs. The outlines of Space Person also recall the rings around the eyes of totemic figures from the Pacific Northwest. 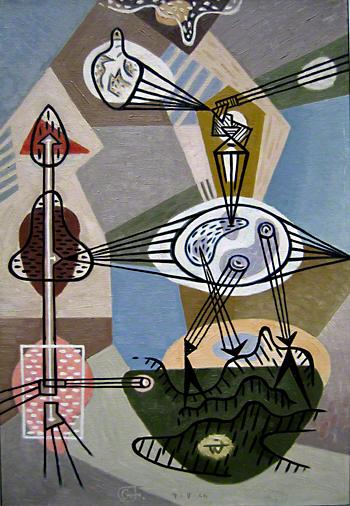 Gordon Onslow Ford was interested in the work of mathematician and physicist Henri Poincaré, whose models of multidimensional space resemble the interlocking color panels that form the background of The Marriage. Between land and sky, a scientific experiment is taking place. Maybe it is the splitting of the atom. Energy for the experiment seems to be drawn from both the sun and a decanter, perhaps of water, and it moves into a rocket heading up into the sky where a cloud gathers.

Reminiscent of diagrams about condensation and evaporation, The Marriage also recalls the very stylized depictions of nature in pre-Columbian seals. The painting could be a depiction of Albert Einstein's theory of the equivalence of matter and energy as it would have been explained in pre-Columbian times; in that sense, it would be a "marriage" of heaven and earth. This painting, with its striking dynamic energy, thus represents a different way of combining a scientific view with a vision of the ancient world.