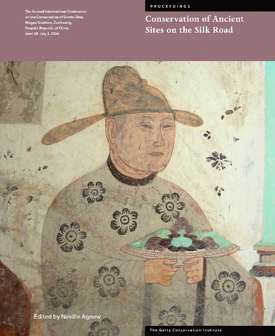 The Mogao grottoes, a World Heritage Site near the town of Dunhuang in western China, are located on the edge of the Gobi Desert, along the ancient caravan routes—collectively known as the Silk Road—that once linked China with the West. Founded by Buddhist monks as an isolated monastery in the late fourth century, Mogao grew gradually over the following millennium, as monks, local rulers, and travelers carved hundreds of cave temples into a mile-long rock cliff, and adorned them with vibrant murals portraying episodes from Buddhist scripture, luxuriant portraits of Silk Road rulers, and richly detailed scenes of everyday life. The Mogao caves developed into a spiritual and artistic mecca whose renown extended from the Chinese capitals to the far western reaches of Central Asia.

Today there remain more than 490 grottoes, the walls of which are decorated with some 45,000 square meters of wall paintings, making Mogao one of the world’s most significant sites of Buddhist art. This volume contains the proceedings of the second conference on the conservation of Silk Road grotto sites cosponsored by the Getty Conservation Institute and the Dunhuang Academy, under the aegis of the State Administration of Cultural Heritage of the People’s Republic of China.

Neville Agnew joined the Getty Conservation Institute (GCI) in 1988. He has a Ph.D. in chemistry and worked in academia in South Africa and Australia prior to changing to conservation in 1980. He has participated in many of the GCI’s projects and has led the initiative in China since its beginning in 1989. He is the author of publications in research chemistry and conservation, including (with two coauthors) Cave Temples of Mogao. Agnew has served on the editorial board of the journal Conservation and Management of Archaeological Sites and on the board of the National Center for Preservation Technology and Training (a program of the U.S. National Park Service). His association with conservation in China has resulted in a number of awards: the Friendship Award of the State Council in 2000, the International Scientific and Technological Cooperation Award of the PRC in 2005, and awards from Gansu province and the Dunhuang Academy. He is currently senior principal project specialist in the Field Projects department of the GCI.