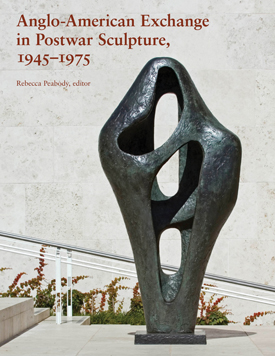 Anglo-American Exchange in Postwar Sculpture, 19451975 redresses an important art historical oversight. Histories of American and British sculpture are usually told separately, with artists and their work divided by nationality; yet such boundaries obscure a vibrant exchange of ideas, individuals, and aesthetic influences. In reality, the postwar art world saw dynamic interactions between British and American sculptors, critics, curators, teachers, and institutions. Using works of art as points of departure, this book explores the international movement of people, objects, and ideas, demonstrating the importance of Anglo-American exchange to the history of postwar sculpture.

Jo Applin is Lecturer in Modern and Contemporary Art at the University of York, England. She specializes in postwar American and European art, and is completing a book Eccentric Objects: Rethinking Sculpture in 1960s America. She has published on this and related topics in journals, including Art History, Art Journal, Tate Papers, and Parallax. She is currently researching the work of Lee Lozano and writing a book on a single work by Yayoi Kusama for Afterall/MIT Press.

Jennifer Wulffson Bedford is currently Lecturer in Art History at The Ohio State University. She was formerly the senior editor of the Bibliography of the History of Art at the Getty Research Institute. She presented the paper “Kramer versus Kramer” on Hilton Kramer’s criticism of Henry Moore’s work at the New Approaches to British Art symposium held at the Courtauld Institute of Art in June 2010.

Sarah Hamill is Assistant Professor of Modern and Contemporary Art at Oberlin College. Her research explores the intersections between sculpture and photography, and the politics of display. She is the author of an article on contemporary photography and sculpture published in Camerawork, 2009, and of David Smith: Works, Writings, Interviews (Ediciones Polígrafa, forthcoming in spring 2011). Her book on Smith’s photography, David Smith in Two Dimensions: Sculpture, Photography, and Space, is forthcoming from the University of California Press.

Courtney J. Martin received a doctorate in the History of Art from Yale University in 2009. Her research and writings have engaged several disciplines, including contemporary art, architecture, and twentieth-century British art. She is the author of “Rasheed Araeen, Live Art and Radical Politics in Britain” (Getty Research Institute Journal, 2010). Currently, she is Postdoctoral Research Associate at Vanderbilt University and is working on a manuscript about British art and politics after 1968.

Timothy D. Martin is Reader in Architecture and Cultural Theory at De Montfort University, UK, and a member of the New Lacanian School, London. His essays include “Donald Judd’s Badge” and “Psychosis and the Sublime in American Art: Rothko and Smithson.”

Rebecca Peabody is Manager of Research Projects at the Getty Research Institute. Her research focuses on representations of race, gender, and nationality in twentieth-century American art and culture. She coedited Pacific Standard Time: Los Angeles Art 1945–1980 (J. Paul Getty Museum, forthcoming in 2011), and her essays have appeared, or are forthcoming, in exhibition catalogues and edited volumes, as well as in the journals Comparative Literature, Ethnic and Racial Studies, Getty Research Journal, Slavery & Abolition, and Studies in Ethnicity and Nationalism.

Alistair Rider is Lecturer in Art History at the University of St. Andrews and writes on modern and contemporary sculpture. He is the author of Carl Andre: Things in Their Elements (Phaidon, 2011) and coeditor of About Carl Andre: Critical Texts since 1965 (Ridinghouse, 2006).

Pauline Rose is Senior Lecturer and Research Fellow at the Arts University College at Bournemouth, UK. Her book Henry Moore in America: Art, Business and the Special Relationship is forthcoming in 2012/2013 from I. B. Tauris, assisted by an author’s grant from the Paul Mellon Centre for Studies in British Art. She has published articles in Visual Culture in Britain and The Sculpture Journal. Her essay “Photography and Sculpture: Portraying Henry Moore” is included in the Russian Academy of Arts’ recent publication The Artist’s Portrait and Self-Portrait.

Joy Sleeman is Senior Lecturer in History and Theory at UCL Slade School of Fine Art, London. Her research embraces modern and contemporary sculpture and landscape, and land art, with a focus on work from or in Britain. Recent publications include The Sculpture of William Tucker (2007), Earth-Moon-Earth (exhibition, Nottingham, UK, 2009), and “Land Art and the Moon Landing” (Journal of Visual Culture, 2009).

Robert Slifkin is Assistant Professor of Fine Arts at the Institute of Fine Arts, New York University. His primary research interest is the artistic, cultural, and intellectual production in postwar United States. He is the author of the manuscript Out of Time: Philip Guston and the Refiguration of Postwar Art, has published essays on the “black paintings” of James Whistler and on the work of Donald Judd, and has written numerous book and exhibition reviews.

John C. Welchman is Professor of Art History in the Visual Arts department at the University of California, San Diego. His books include Modernism Relocated: Towards a Cultural Studies of Visual Modernity (Allen & Unwin, 1995), Invisible Colours: A Visual History of Titles (Yale, 1997), and Art after Appropriation: Essays on Art in the 1990s (Routledge, 2001). He is the editor of Rethinking Borders (Minnesota UP/Routledge, 1996); Institutional Critique and After (2006); The Aesthetics of Risk (2008); and Black Sphinx: On the Comedic in Modern Art (2010), all with JRP|Ringier.

Rebecca Zamora is a research assistant at the Getty Research Institute and a graduate student in Latin American Studies at the University of California Los Angeles. She has compiled bibliographies on Lawrence Alloway for the Tate Britain seminar “Lawrence Alloway Reconsidered,” as well as the research guide for the Getty Research Institute project “Surrealism in Latin America.”