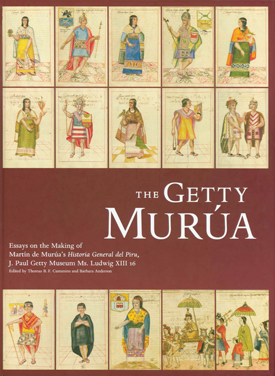 Edited by Thomas B. F. Cummins and Barbara Anderson

Of the three extant illustrated manuscripts chronicling the history of the Inca empire and early Spanish rule in the Andes, two are by the Mercedarian friar Martín de Murúa, who probably arrived in Peru in the 1570s. His Historia del origen, y genealogía real de los reyes ingas del Piru (1590) and Historia general del Piru (1616) drew on the authors experiences among the indigenous peoples and colonial officials of vice regal Peru as well as on accounts by other Spanish writers and the talents of several Andean illustrators. The Historia general—now known as the Getty Murúa—comprises thirty-eight hand-colored images, most depicting Inca kings and queens, and nearly four hundred folios of beautifully calligraphed text. The essays gathered in this volume focus not only on the manuscripts physical components—quires and watermarks, scripts and pigments—but also on its relation to Inca textiles, European portraits, Murúa’s other manuscript, and the intellectual and social context that gave rise to but did not publish his Historia general. The Getty Murúa provides a complex and original analysis of the creation and fate of this early modern historical and artistic treasure.

Rolena Adorno is Reuben Post Halleck Professor of Spanish in the Department of Spanish and Portuguese at Yale University. She is a member of the American Academy of Arts and Sciences.

Barbara Anderson is head of Exhibitions and consulting curator for Spanish and Latin American materials at the Getty Research Institute.

Ivan Boserup is head of the Department of Manuscripts and Rare Books of Det Kongelige Bibliotek in Copenhagen.

Elena Phipps is senior museum conservator in the Department of Textile Conservation at the Metropolitan Museum of Art in New York.

Karen Trentelman is senior scientist at the Getty Conservation Institute’s Museum Research Laboratory, where she directs a research program engaged in the scientific examination of works of art in the collections of the J. Paul Getty Museum.

Nancy Turner is conservator of manuscripts in the Department of Paper Conservation at the J. Paul Getty Museum, where since 1984 she has overseen the preservation of the collection of illuminated medieval and Renaissance manuscripts.