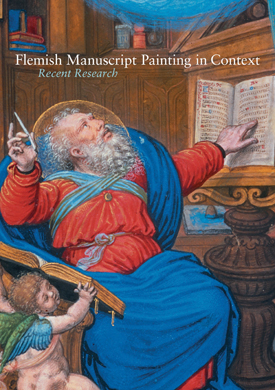 A companion to the Getty's prize-winning exhibition catalogue Illuminating the Renaissance: The Triumph of Flemish Manuscript Painting in Europe, this volume contains thirteen selected papers presented at two conferences held in conjunction with that exhibition. The first was organized by the Getty Museum, and the second was held at the Courtauld Institute of Art under the sponsorship of the Courtauld Institute and the Royal Academy of Arts. Added here is an essay by Margaret Scott on the role of dress during the reign of Charles the Bold.

Texts include Lorne Campbell’s research into Rogier van der Weyden’s work as an illuminator, Nancy Turner’s investigation of materials and methods of painting in Flemish manuscripts, and trenchant commentary by Jonathan Alexander and James Marrow on the state of current research on Flemish illumination. A recurring theme is the structure of collaboration in manuscript production. The essays also reveal an important new patron of manuscript illumination and address the role of illuminated manuscripts at the Burgundian court. A series of biographies of Burgundian scribes is featured.

Jonathan Alexander is Sherman Fairchild Professor of Fine Arts at the Institute of Fine Arts, New York University, where he teaches medieval art history. His special area of interest is manuscript illumination of the Middle Ages and Renaissance. His most recent books are Studies in Italian Manuscript Illumination (2002) and The Towneley Lectionary Illuminated for Cardinal Alessandro Farnese by Giulio Clovio (1997). He is now working on a book tentatively titled "Italian Renaissance Illumination c. 1450-1600."

Chystèle Blondeau received her Ph.D. in the history of art from the University of Paris X (Nanterre) in 2003 with a dissertation on representations of Alexander the Great at the Burgundian court. She specializes in secular iconography, issues of patronage, and the links between art and power. She teaches medieval art history at the University of Paris X (Nanterre) and elsewhere.

Stephanie Buck received her Ph.D. from the Freie Universität Berlin in 2000, and is currently adjunct professor at FU-BEST, Berlin, and a Getty fellow at the Friedrich-Alexander Universität Erlangen-Nürnberg. She has contributed to a critical catalogue of fifteenth-century Netherlandish drawings in the Kupferstichkabinett, Berlin (2001), and to an exhibition of fifteenth- and sixteenth-century German drawings at the Graphische Sammlung, Städel, Frankfurt am Main (2004).

Gregory T. Clark is professor of art history at the University of the South in Sewanee, Tennessee. He has published numerous studies on French and southern Netherlandish manuscript illumination of the fifteenth century. His most recent book is The Spitz Master: A Parisian Book of Hours (2003).

Richard Gay is assistant professor of art history at the University of North Carolina, Pembroke. Formerly assistant curator of manuscripts at the J. Paul Getty Museum, he helped prepare the exhibition and contributed to the publication of Illuminating the Renaissance: The Triumph of Flemish Manuscript Painting in Europe (2003). His special interest is French manuscript illumination, and he has published previously on Flemish scribes.