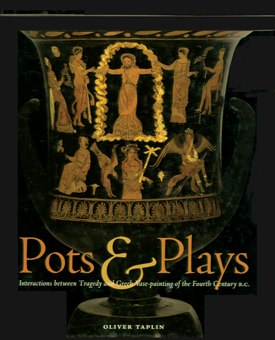 Pots & Plays: Interactions Between Tragedy and Greek Vase-painting of the Fourth Century B.C.

Although Greek tragedy usually generates greater popularity and interest than comedy, past studies of the depiction on ceramic vases of theater scenes have mostly concentrated on comedies. A significant proportion of the vases with depictions of tragedy was first published only in the last twenty-five years. There has been no sustained attempt to discuss these exciting additions in relation to tragedy, nor to reconsider the cultural context in the light of these discoveries.

Oliver Taplin here sets out to examine the previously understudied tragic scenes. Through detailed scrutiny of some 109 vases and vase fragments with depictions of Greek tragedies, he is able to identify plays and scenes by the great playwrights Aeschylus, Sophocles, and Euripides. Some scenes can with great certainty be identified with surviving tragedies, while the author more tentatively suggests that others may depict scenes from tragedies that are now lost or survive only as fragments.

Despite the uncertainties of many identifications, Taplin demonstrates that some Greek vase-paintings are significantly related to tragedies, and that the two art forms throw light on each other. Appreciation of this interrelationship enhances the quality and power of both drama and vase-painting.

Oliver Taplin is professor of Classics at Magdalen College, University of Oxford, and a fellow of the British Academy. He is a specialist in the interpretation of Greek drama through performance in both ancient and modern times. His books include Greek Tragedy in Action (1978), Homeric Soundings (1992), and Comic Angels (1993), a groundbreaking study of Greek comedy and vase-painting.