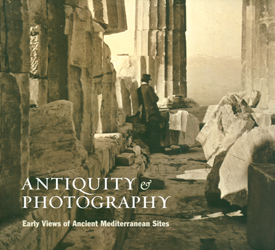 The invention of the daguerreotype and calotype processes fundamentally changed scholarly and aesthetic approaches to the past. The accuracy and immediacy of photographs gave scientists a new means to document and study ancient architecture, artifacts, and language. At the same, the first photographers to visit ancient Mediterranean sites saw themselves as artists using the new medium to capture what had up to then been represented only by draftsmen or painters. The early photographs were rapidly disseminated among a wider audience eager to see, rather than merely imagine, the remnants of antiquity. Today these images are still prized, both for their vision and originality and for their inherent documentary value. The early photographs of the Roman Forum, the Acropolis in Athens, and the pyramids of Giza have made these sites a part of our shared cultural experience, fixing them in our minds as places of historic—and mythic—significance.

Antiquity and Photography explores the influence of photography on archaeology between 1840 and 1880. This was the period that saw the evolution of archaeology as a professional discipline as well as the rapid growth of the new photographic medium. With illustrations drawn from the collections of the Getty Museum and the Getty Research Institute, the essays in this book examine the growth of archaeology as a scientific discipline and its increasing reliance on photographic documentation, and they consider some of the conventions that came to govern the ostensibly objective photographs of antiquities and ancient sites. Biographical essays explore the careers of two major early photographers, Joseph-Philibert Girault de Prangey and William James Stillman. In addition, portfolios with works by Maxime Du Camp, John Beasley Greene, Francis Frith, Robert Macpherson, Adolphe Braun, and others testify to the strength and consistency of other early photographers who captured the antique worlds around the Mediterranean.

John K. Papadopoulos is professor of classics and archaeology at the University of California, Los Angeles.

Andrew Szegedy-Maszak is professor of classical studies at Wesleyan University.