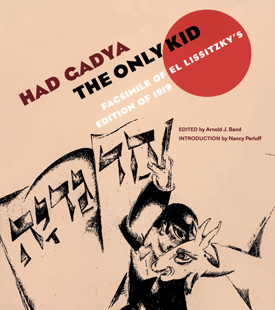 Had Gadya: The Only Kid (Facsimile of El Lissitzky's Edition of 1919)

This illustrated version of the popular Passover song “Had gadya” was the wonderfully playful offspring of the avant-garde artist El Lissitzky (1890–1941). It dates to a little-known period early in his career when he immersed himself in the Jewish cultural renaissance that flourished in Russia from roughly 1912 to the early 1920s. Signed with his Hebrew given name, this volume—with its wraparound cover, colorful lithographic montages, and stylized use of Yiddish and Aramaic words—celebrates Lissitzky’s interest in Jewish folk traditions while looking forward to the dynamic graphic and typographic designs for which he is best remembered.

This near-scale facsimile-including the rarely seen cover-allows readers to experience Lissitzky’s Had gadya as originally envisioned. It is accompanied here by Nancy Perloff’s discussion of the work’s cultural and artistic contexts, Arnold J. Band’s English translation of Lissitzky’s Yiddish version of the song, sections on Lissitzky’s iconography and vocabulary, and lyrics set to music.

Arnold J. Band is professor emeritus of Hebrew and comparative literature at the University of California, Los Angeles.

Nancy Perloff is collections curator of modern and new media collections at the Getty Research Institute.