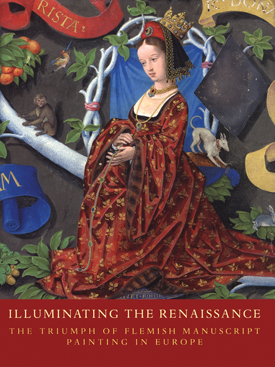 Illuminating the Renaissance: The Triumph of Flemish Manuscript Painting in Europe

This comprehensive and richly illustrated catalogue focuses on the finest illustrated manuscripts produced in Europe during the great epoch in Flemish illumination. During this aesthetically fertile periodbeginning in 1467 with the reign of the Burgundian duke Charles the Bold and ending in 1561 with the death of the artist Simon Beningthe art of book painting was raised to a new level of sophistication. Sharing inspiration with the celebrated panel painters of the time, illuminators achieved astonishing innovations in the handling of color, light, texture, and space, creating a naturalistic style that would dominate tastes throughout Europe for nearly a century.

Centering on the notable artists of the periodSimon Marmion, the Vienna Master of Mary of Burgundy, Gerard David, Gerard Horenbout, Bening, and othersthe catalogue examines both devotional and secular manuscript illumination within a broad context: the place of illuminators within the visual arts, including artistic exchange between book painters and panel painters; the role of court patronage and the emergence of personal libraries; and the international appeal of the new Flemish illumination style. Contributors to the catalogue include Maryan W. Ainsworth, curator of European paintings at the Metropolitan Museum of Art; independent scholar Catherine Reynolds; and Elizabeth Morrison, assistant curator of manuscripts at the Getty Museum.

Maryan W. Ainsworth is curator of early Netherlandish, French, and German paintings at the Metropolitan Museum of Art and adjunct professor at Barnard College and Columbia University. She specializes in the integration of technical examination of paintings with art-historical research. Among her many publications is Gerard David: Purity of Vision in an Age of Transition.

Mari-Tere Alvarez is senior project coordinator at the J. Paul Getty Museum and recently received her Ph.D. in art history from the University of Southern California with a dissertation entitled The Art Market in Renaissance Spain: From Flanders to Castile. She has published on polychrome sculpture and is currently working on the Renaissance collection and patronage of Mencía de Mendoza.

Brigitte Dekeyzer is a member of the Study Centre of Flemish Miniaturists (Belgium, K. U. Leuven). She has published on Ghent-Bruges manuscript illumination, especially on the Mayer van den Bergh Breviary (Antwerp, Museum Mayer van den Bergh, Inv. Nr. 946), the central topic of her Ph.D thesis.

Richard Gay, assistant curator in the Department of Manuscripts at the J. Paul Getty Museum, specializes in French manuscript illumination. He has organized diverse exhibitions on medieval illumination at the Getty Museum, and has taught at Cornell University.

Thomas Kren is curator of manuscripts at the J. Paul Getty Museum and adjunct professor of art history at the University of Southern California. His publications on Flemish and French manuscript illumination include Simon Bening’s Flemish Calendar; Margaret of York, Simon Marmion, and the Visions of Tondal; and Renaissance Painting in Manuscripts: Treasures from the British Library.

Scot McKendrick is curator of manuscripts at the British Library and a Fellow of the Courtauld Institute of Art. He has lectured and published extensively on late-medieval illuminated manuscripts and art and is the author of The History of Alexander the Great.

Elizabeth Morrison is assistant curator in the Department of Manuscripts at the J. Paul Getty Museum. She is a specialist in French Gothic and Flemish Renaissance manuscript illumination and has curated various exhibitions at the Getty Museum.

Catherine Reynolds, formerly a lecturer in art history at the Universities of Reading and London, is currently a consultant on manuscripts for Christies, London. Her publications include contributions to Boccaccio Visualizzato and to volumes on Robert Campin, Jan van Eyck, and Hans Memling.