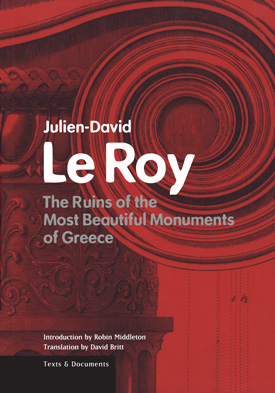 The Ruins of the Most Beautiful Monuments of Greece

Julien-David Le Roy’s Les ruines des plus beaux monuments de la Grece, initially issued in 1758, first revealed to European eyes the wonders of Greek classical architecture. Overnight, Greece became the rage, much to the chagrin of Giovanni Battista Piranesi and other defenders of the genius of Rome. The impact of the volume’s splendid engravings of Athens’s ancient ruins on contemporary aesthetics was heightened—particularly in the much-expanded edition of 1770—by its two highly provocative theoretical essays. In one, Le Roy set forth a compelling linear history of the conceptual forms of architecture that began in Egypt, moved to Greece, then Rome, and finally modern Europe. In the other, seeking to express the experience of architectural form and its effects, Le Roy gave new voice to feeling. Here the second edition of Les ruines is published in English for the first time, framed by the sweeping exposition of both the intellectual milieu out of which Le Roy’s work emerged and the controversies it generated. Introduction by Robin Middleton and translation by David Britt.

David Britt has translated many art historical texts, including Piranesi’s Observations on the Letter of Monsieur Mariette.