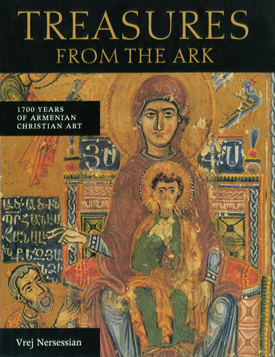 Treasures from the Ark: 1700 Years of Armenian Christian Art

Armenia was the first country to recognize Christianity as the official state religion in 301 AD, twelve years before Constantine’s decree granting tolerance to Christianity within the Roman Empire. Ever since, Armenia has claimed the privilege of being the first Christian nation, and the wealth of Christian art produced in Armenia since then is testimony to the fundamental importance of the Christian faith to the Armenian people.

This extensive new survey of Armenian Christian art, published to accompany a major exhibition at The British Library, celebrates the Christian art tradition in Armenia during the last 1700 years. The extraordinary quality and range of Armenian art that is documented here includes sculpture, metalwork, textiles, ceramics, wood carvings and illuminated manuscripts and has been drawn together from collections throughout the world.

In his authoritative text, Dr. Vrej Nersessian, Curator at The British Library, charts the development of Christianity in Armenia. This fascinating history is essential to an understanding of the art and religious tradition of Armenia, a country in which the sense of the sacred extends well beyond the purely religious, infiltrating the entire fabric of Armenian affairs to create a fascinating culture.

This sumptuously illustrated book will be of immense value to anyone with an interest in Byzantine art and culture, the history of Christianity, and the history of Armenia and the Middle Orient.