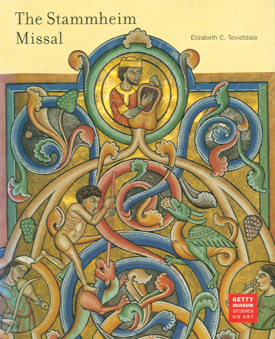 The Stammheim Missal was relatively inaccessible until the Getty Museum acquired it in 1997. With this publication, in which all the major illumination is reproduced in color, both scholars and museum visitors can appreciate the missal more fully as one of the outstanding monuments of medieval art. Created in and for the north German monastery of Saint Michael at Hildesheim, the missal preserves the text and music of the abbey’s religious ritual, and its illumination expresses fundamental Christian theology in visual form. Elizabeth C. Teviotdale elucidates the manuscript and its illumination within three traditions: the artistic heritage of the monastery, the illumination of Mass books, and the role of Jewish scripture in Christian art.

The Stammheim Missal is the first volume in the Getty Museum Studies on Art series to treat an illuminated manuscript. The series is designed to introduce individual artworks or small groups of related works to a broad public with an interest in the history of art.