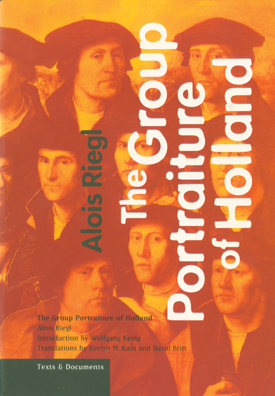 The Group Portraiture of Holland

The Group Portraiture of Holland shows how artists such as Rembrandt and Frans Hals radically altered the relationship of the beholder to the work of art. Alois Riegl’s masterly study has become a point of departure for a variety of twentieth-century readings of art, demonstrating again that, as Walter Benjamin wrote of Riegl’s Late Roman Art Industry, “every great scholarly discovery … portends a revolution in method.”

In this volume, Alois Riegl argues that group portrait painters in Holland radically transformed the beholder’s relationship to the work of art. Italian art based on internal coherencethat is, a clear hierarchy of the figures depicted in the painting—ran counter to the Kunstwollen (artistic volition) of the artists of democratic Holland. Seeking to maintain equality among the sitters, these artists introduced external coherence into their group portraits—that is, the figures portrayed actively engage the viewer outside the frame. Riegl’s exploration of this new role for the beholder, and of the increasingly nuanced interplay of internal and external coherence in works by painters such as Rembrandt and Frans Hals, broke new ground in the theory of communication, in the aesthetics of reception, and in historical psychology.

Alois Riegl was one of the most influential art historians of the late nineteenth and early twentieth centuries. Born in 1858 and trained at the University of Vienna, Riegl published his work between 1891 and 1903, before his death in 1905 at the age of forty-seven. Notable among this body of work are Stilfragen: Grundlegungen zu einer Geschichte der Ornamentik (translated as Problems of Style: Foundations for a History of Ornament) and Die spätrömische Kunstindustrie nach den Funden in Österreich-Ungarn (Late Roman Art Industry). Riegl was a leading representative of the First Viennese School of art history.

Evelyn M. Kain is professor and chair of the art department of Ripon College, Wisconsin. Her translations include Alois Riegl’s Problems of Style.

David Britt was an editor of art books at Thames & Hudson in London formore than twenty years; since 1987 he has been translating full-time. Histranslations in the Getty Research Institute’s Texts & Documents series includetitles by Aby Warburg, Friedrich Gilly, and Nicolas Le Camus de Mézières.