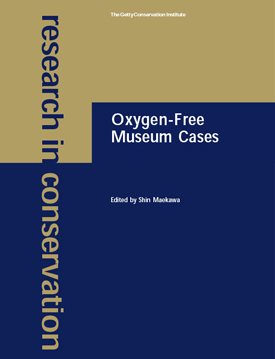 One of the challenges in protecting and displaying environmentally sensitive objects is preventing deterioration caused by the presence of oxygen. This volume describes the design and construction of an oxygen-free, hermetically sealed, display and storage case developed by the Getty Conservation Institute for the long-term protection of such objects. The case was originally designed as a collaborative project between the Egyptian Antiquities Organization and the GCI to conserve the Royal Mummy Collection at the Egyptian Museum in Cairo.

Seven chapters cover the protection of cultural objects from environmental deterioration by reducing exposure to oxygen and by using inert gases for biodeterioration control. Also included are details on how the design and construction of the oxygen-free case has been adapted for other applications, specifically for the original documents of the Constitution of India in New Dehli and for the mummy collections at the Egyptian Museum and at the Museu Victor Balaguer in Vilanova i la Geltru, Spain.

The Research in Conservation reference series presents the findings of research conducted by the Getty Conservation Institute and its individual and institutional research partners, as well as state-of-the-art reviews of conservation literature. Each volume covers a topic of current interest to conservators and conservation scientists.

Eric F. Hansen is an associate scientist who joined the Getty Conservation Institute in 1985. His research interests include the deterioration of natural materials, the factors affecting the treatment of painted objects, and the properties of polymers used in conservation. He was chair of the American Institute for Conservation of Historic and Artistic Works (AIC) subgroup on Research and Technical Studies in 1993 and became a fellow of the AIC in 1992.

Nasry Yousef Iskander has expertise in practical machining and woodwork. He has been the general director of conservation of the Egyptian Antiquities Organization (now Supreme Council of Antiquities) since 1984, as well as chief of the Conservation Laboratories of that organization since 1980.

Hari Kishan joined the National Physics Laboratory (NPL) in New Delhi, where he has been participating in research and development work on low-temperature, solid-state physics and applied cryogenics. He is a senior scientist at the NPL and a life member of several professional societies. His research interest is in the field of cryogenics, preservation of national heritage objects, and humidity measurements. He is presently engaged in establishing a National Humidity Standard at the NPL.

Shin Maekawa has been a senior scientist at the Getty Conservation Institute since 1990, where he has been conducting research on the microenvironment of display and storage cases as well as environmental monitoring at various archaeological sites.

Nieves Valentín joined the Spanish Ministry of Culture in 1973. Since 1987, she has been a research scientist at the Instituto de Conservación y Restauración de Bienes Culturales (now Instituto del Patrimonio Histórico Español) in Madrid. From 1987 to 1989, she was a research associate at the Getty Conservation Institute, where she developed projects on the biodeterioration of museum collections and the application of new deinfestation methods for the conservation of historic collections. Since 1989, she has collaborated on investigations related to the biodeterioration of monumental stonework and historic stained glass.