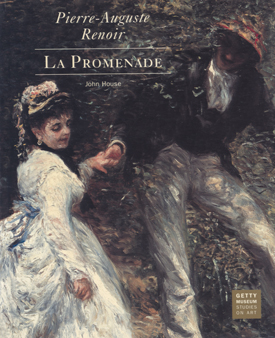 To late-twentieth-century eyes, Pierre-Auguste Renoir’s La Promenade raises few questions and poses few problems; indeed, little has been written about the picture, despite its regular appearance in exhibitions and the Renoir literature. This study of the work—a masterpiece from the collection of the J. Paul Getty Museum—reveals surprising details about the artistic, historical, and moral contexts in which the painting was created.

John House, the author of this fascinating monograph, examines the many facets of the work and what it reveals about Renoir as a man and artist. He asks, “What did it mean to paint a picture like La Promenade in France in 1870, in the final months of Napoleon III’s Second Empire?” The reader is invited to look at the canvas—and Impressionism—as a rejection of the idealist world of academic art and as a challenge to contemporary social norms.

Pierre-Auguste Renoir: La Promenade is part of the Getty Museum Studies on Art series, designed to introduce individual artworks or small groups of related works to a broad public with an interest in the history of art.

John House is Professor of the History of Art at the Courtauld Institute of Art, University of London. He was co-organizer of the 1985–86 Renoir exhibition (London, Hayward Gallery; Paris, Grand Palais; and Boston, Museum of Fine Arts) and guest curator of Impressions of France (London, Hayward Gallery, and Boston, Museum of Fine Arts) in 199596. He is the author of Monet: Nature into Art (1986) and numerous essays and articles on French nineteenth-century art.