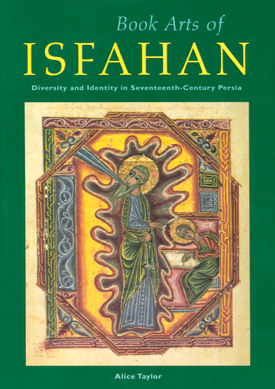 Book Arts of Isfahan: Diversity and Identity in Seventeenth-Century Persia

In the seventeenth century, the Persian city of Isfahan was a crossroads of international trade and diplomacy. Manuscript paintings produced within the city’s various cultural, religious, and ethnic groups reveal the vibrant artistic legacy of the Safavid Empire.

Published to coincide with an exhibition at the Getty Museum, Book Arts of Isfahan offers a fascinating account of the ways in which the artists of Isfahan used their art to record the life around them and at the same time define their own identities within a complex society.

Alice Taylor is the Chair of the Humanities and Fine Arts Division at West Los Angeles College. In addition to Armenian medieval culture, her research involves the collection and display of Early Christian art, and eighteenth-century Russian visual culture.