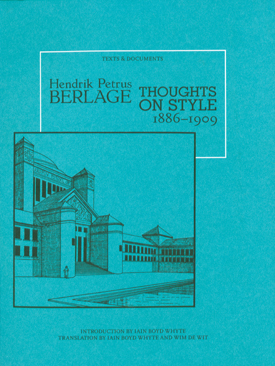 Looking back to the period around 1910, Mies van der Rohe once commented that there was but a single architect then working on the European architectural scene, “Berlage was a lone giant.”

In parallel activities as both an architect and an architectural philosopher, H. P. Berlage created a series of buildings that witnessed the gestation and birth of architectural Modernism and a body of writings that probed in depth the problems and possibilities of this new style. But whereas his Stock Exchange in Amsterdam, with its rational mastery of materials and space, has long been celebrated for its seminal influence on the architecture of the new century, Berlage’s passionate writings on architecture, which exerted an equal influence on his contemporaries, have often been neglected.

In his wide-ranging critical introduction, Iain Boyd Whyte convincingly demonstrates that one corpus of work cannot be understood without taking into account the other: Berlage’s writings inform his architecture to the same extent that his buildings reflect his probing aesthetic deliberations. Berlage’s principal texts are here brought together in English translation for the first time. Collectively, they present to the English-language reader a new and vital chapter in the history of European Modernism.

Iain Boyd Whyte is the director of the Centre for Architectural History and Theory at the University of Edinburgh.

Wim de Wit has held curatorial posts in Holland; at the Cooper-Hewitt Museum, New York; and at the Chicago Historical Society. He is Head of Special Collections at the Getty Research Institute.