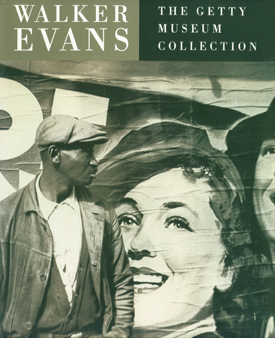 Walker Evans: Catalogue of the Collection

Walker Evans is widely recognized as one of the greatest American photographers of the twentieth century, and the J. Paul Getty Museum owns one of the most comprehensive collections of his work, including more of his vintage prints than any other museum in the world. This lavishly illustrated volume brings together for the first time all of the Museum’s Walker Evans holdings.

Included here are familiar images—such as Evans’s photographs of tenant farmers and their families, made in the 1930s and later published in Let Us Now Praise Famous Men—and images that are much less familiar—such as the photographs Evans made in the 1940s of the winter quarters of the Ringling Brothers circus, or his very late Polaroids, made in the 1970s. In addition, many previously unpublished Evans photographs, and variant croppings of classic images, appear here for the first time.

Author Judith Keller has written a lively, informative text that places these photographs in the larger context of Evans’s life and career and the culture—especially the popular culture—of the time. In so doing, she has produced an indispensible volume for anyone interested in the history of photography or American culture in the twentieth century.

Also included is the most comprehensive bibliography on Walker Evans published to date.

Judith Keller is Associate Curator of Photographs at the J. Paul Getty Museum.