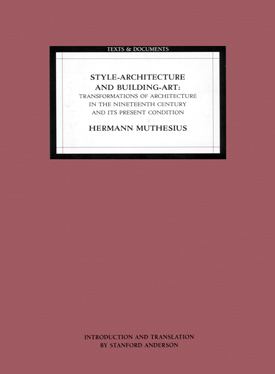 Style-Architecture and Building-Art: Transformations of Architecture in the Nineteenth Century and Its Present Condition

Introduction and translation by Stanford Anderson

Although Hermann Muthesius is best known today in Anglo-American architectural literature for his studies of the English house, these impressive volumes were only one aspect of a more encompassing modernist polemic emanating from the German realist movement of the late 1890s. Style-Architecture and Building-Art, published in 1902, was Muthesius’s first serious effort to define the lineaments of early Modernism. A turn-of-the-century retrospective, it contains nearly all of the assumptions—good and bad—of later modernist historiography: the disdain of the nineteenth century for its artistic eclecticism and lack of originality; an appreciation of the material and industrial forces propelling the upheaval in building technologies; and, above all, a plea for a more sachlich (plain, simple) approach to design. This critical and highly opinionated text not only presages and underscores the tenets of the Deutsche Werkbund (founded five years later) but can itself be viewed as an important cornerstone of the Modern Movement.

Stanford Anderson has written and lectured widely on the historiography of modern architecture and urbanism. He is the head of the Department of Architecture at the Massachusetts Institute of Technology.