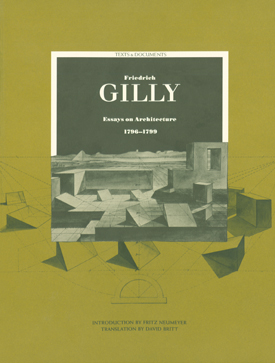 When Friedrich Gilly died in 1800, at the age of twenty-eight, he had published only four short essays, and his executed works consisted of a few minor buildings still under construction. Nonetheless, by virtue of the influence that he—as a teacher, colleague, and friend—exerted on Berlin architects active during the first half of the nineteenth century, Gilly may justly be regarded as the founder of the Berlin architectural tradition. His legacy, moreover, extends into the twentieth century.

This volume seeks to afford new access to Friedrich Gilly's ideas on architecture by presenting for the first time annotated English translations of his four published essays and the unpublished descriptions of his proposed memorial to Frederick the Great. An introduction by Fritz Neumeyer clearly locates Gilly's work and ideas within their historical context and forcefully demonstrates the lasting influence that Gilly has had on architecture, particularly in Germany.

David Britt was an editor of art books at Thames & Hudson in London for more than twenty years; since 1987 he has been translating full-time. His translations in the Getty Research Institutes Texts & Documents series include titles by Aby Warburg, Friedrich Gilly, and Nicolas Le Camus de Mézières.