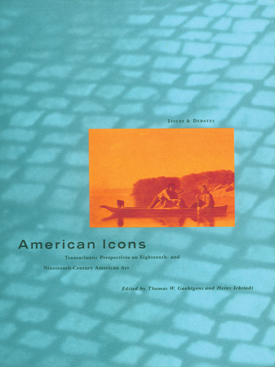 American Icons explores American self-definition through the creation of a national art. Like their writer counterparts, American artists of the eighteenth and nineteenth centuries yearned to create their art in terms of a uniquely American experience of history and nature. Paradoxically, however, when they insisted upon American originality and uniqueness, they could not but mediate these qualities through European conventions. European methods and motifs were, nonetheless, used differently in the social, economic, and communicative contexts of the New World. For American artists, Europe was an ensemble, not to say a warehouse, of traditions and styles from which they could choose according to their interests and preferences. Innovation was therefore not necessarily a matter of breaking new ground but a matter of how established means were used in new circumstances and for different purposes. The present essays explore the construction of an American sublime, of a mythology of the frontier, of a democratic style of common people and common objects, all expressed through the language of European art, while changing that language in the process of coining a new usage.

Hubert Beck specializes in the study of modern American painters and particularly their depictions of cityscapes. He is associate curator of the Museum für Moderne Kunst in Frankfurt am Main, and he holds a lectureship in American studies at the Institut für England- und Amerikastudien at the Johann Wolfgang Goethe-Universität, also in Frankfurt.

Martin Christadler is professor of American literature at the Johann Wolfgang Goethe-Universität in Frankfurt am Main. His research focuses on eighteenth- through twentieth-century authors and the relationship between history and painting in America.

Nicolai Cikovsky, Jr., has organized exhibitions on the works of Raphaelle Peale, William Merritt Chase, and Sanford Robinson Gifford, which reflect his concentration on the study of nineteenth-century American painting. He is curator of American and British paintings at the National Gallery of Art, Washington, D.C.

Françoise Forster-Hahn concentrates her research on the interrelationships of art, politics, and popular culture in nineteenth- and twentieth-century Europe. She is professor of the history of art at the University of California, Riverside.

Ursula Frohne focuses her studies on nineteenth- and twentieth-century American and European art. Since 1989 Frohne has held a teaching position in the department of art history at the Freie Universität, Berlin.

Barbara Gaehtgens specializes in seventeenth-century Dutch art history. She teaches the history of art at the Technische Universität, Berlin.

Thomas W. Gaehtgens is an art historian and the author of numerous publications on eighteenth- through twentieth-century French art and on contemporary art and art criticism. Since 1979 he has held the position of professor of art history at the Freie Universität, Berlin.

Barbara Groseclose divides her research interest between art and literature. She is professor of art history at the Ohio State University, Columbus, and is writing a book on British sculpture in India.

Olaf Hansen concentrates his research on nineteenth- and twentieth-century American literature, literary criticism, and theory as well as photography and the visual arts. He is executive director of the Zentrum für Nordamerika-Forschung and professor of American literature and culture at the Johann Wolfgang Goethe-Universität in Frankfurt am Main.

William Hauptman specializes in nineteenth-century European art with particular interest in Swiss painting. He is presently associated with the Musée Historique de Lausanne.

Heinz Ickstadt has published extensively on American literature of the nineteenth and twentieth centuries; much of his research is centered on questions of class and culture. He is professor of American literature at the John F. Kennedy-Institut für Nordamerikastudien at the Freie Universität, Berlin.

Barbara Novak is a specialist on American painting of the nineteenth century. A painter herself, she exhibits at Berry-Hill Galleries in New York. Novak is the Altschul Professor of Art History at Columbia University in New York.

Kathleen Pyne concentrates her research on art in America during the latter half of the nineteenth century, including American Impressionism, the problems of Modernism, and the relationship of belief systems to art. She is assistant professor in the Department of Art, Art History, and Design at the University of Notre Dame.