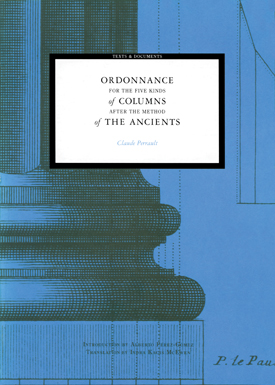 A physician, physicist, Cartesian, and “Modern” in the famous querelle des Anciens et des Modernes, Claude Perrault acquired architectural immortality with his design (sometimes challenged) and construction of the east wing of the Louvre, long acknowledged to be one of the paradigms of French classicism. But perhaps a greater achievement was his translation of The Ten Books of Architecture by the classical Roman theorist Vitruvius, published in 1673. The Latin author was not only made to “speak French” in a most eloquent fashion, but he was also interpreted. Perrault’s scrupulous annotation, which nearly envelops the lone surviving architectural treatise from antiquity, has never been excelled in its scholarship and intellectual stamina. On the basis of this learned second discourse, Claude Perrault began to compose the first post-Renaissance treatise on architecture, one in which the rules of architectural design were now to be determined not by apodictic ancient precedents but by reason and—above all—by a variable national taste. The Ordonnance for the Five Kinds of Columns after the Method of the Ancients, 1683, was the culmination of Perrault’s efforts. A relative theory of beauty was proposed: a gage of battle and affront to the absolute premise of the newly founded Académie Royale d’Architecture, headed by François Blondel. The latter reacted vociferously and quite bitterly. The “scientist” Perrault died in 1688 of a wound received while dissecting a camel.

Edited according to modern standards of scholarship and framed by critical introductions and commentaries, these volumes gradually mine the past centuries for studies that retain their significance in our understanding of art and of the issues surrounding its production, reception, and interpretation. Eminent scholars assist in the selection and publication of volumes in the Texts & Documents series. Each volume acquaints readers with the broader cultural conditions at the genesis of the text and equips them with the needed apparatus for its study. Over time the series will greatly expand our horizon and deepen our understanding of critical thinking on art.

Claude Perrault was an architect in seventeenth-century Paris. Born in 1613, he is best known for designing and constructing the main eastern wing of the Palais du Louvre, known as the Colonnade, in the French classical style. Perrault was also a prominent physician and physicist, and in 1666 became a founding member of the French Academy of Sciences. He wrote an important translation of Vitruvius’s The Ten Books of Architecture, published in 1673. With his brother Charles, the famous writer, Perrault defended modern science in the great querelle des Anciens et des Modernes that defined the intellectual climate in France at the end of the seventeenth century. Claude Perrault died in 1688 of a wound he suffered while dissecting a camel.

Alberto Pérez-Gómez has taught at universities in Mexico City, Houston, Syracuse, and Toronto, and at the Architectural Association in London; he was director of the Carleton University School of Architecture in Ottawa from 1983 to 1986. In January 1987 Pérez-Gómez was appointed Saidye Rosner Bronfman professor of the history of architecture at McGill University in Montreal, where he is currently director of the master’s program in the history and theory of architecture. Since March 1990 he has also been director of a research institute that is cosponsored by the Canadian Centre for Architecture, the Université de Montréal, and McGill University.