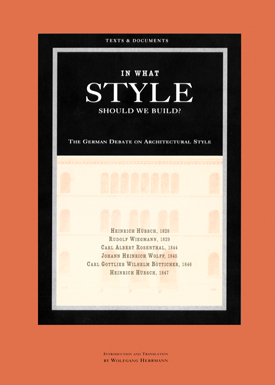 In What Style Should We Build? The German Debate on Architectural Style

Introduction and translation by Wolfgang Herrmann

In 1828 a young architect, Heinrich Hübsch, published a polemical study in which he suggested that the rapid technological progress of the early nineteenth century, combined with changed living habits, had rendered the Greek Neoclassical style unsuitable for present needs or future development. The intriguing title of his book—In What Style Should We Build?—even more than its provocative argument, touched off a dispute among architects that filled the pages of the newly founded journals of the 1830s and 1840s. The theme of this often animated discussion, hastened by the burst of historical knowledge, was the choice of a style—that is, the determination of the premises from which a future and culturally appropriate style might be engendered. By mid-century, however, the confident expectation of bringing the search to a conclusion began to wane. Now, historicism, plurality of styles, and eclecticism were becoming dominant factors in architecture. Evidently, the debate had failed in its prime objective, and yet, it had set in motion intellectual forces that from our present perspective appear to have instituted a new, nineteenth-century style.

Carl Gottlieb Wilhelm Bötticher was born at Nordhausen, near Erfurt, in 1806. In 1827 he entered the Bauakademie in Berlin, concentrating his studies on ornamentation particularly textiles. During the next fifteen years he taught these subjects at several technical schools, and from 1839 he taught at the Bauakademie in Berlin where, in 1844, he was appointed professor of architecture. In 1852 he was appointed a lecturer in archaeology at the Königliche Friedrich-Wilhelms-Universität Berlin and in 1868 he was appointed director of the department of sculpture at the Neue Museum at Berlin. Eight years later he resigned from all his teaching positions. He died in 1899.

Heinrich Hübsch was born in 1795 in Weinheim, near Mannheim. In 1813 he entered the Ruprecht-Karls-Universität Heidelberg as a student of philosophy and mathematics but moved to Karlsruhe two years later to study architecture at Friedrich Weinbrenners private school. In 1817 Hübsch traveled to Rome where he stayed for the next four years. From Rome he visited Greece and Constantinople. He returned to Germany in 1821 and in 1824 he was appointed teacher at the Städelsches Kunstinstitut at Frankfurt. Following Weinbrenner’s death in 1826, he was called to Karlsruhe to assume the post of principal government architect and in 1832 he was appointed director of the architectural department of the newly formed Polytechnische Hochschule. He died in Karlsruhe in 1863.

Carl Albert Rosenthal was born in 1801 in Sudenburg, near Magdeburg. In 1819 he enrolled at the Bauakademie in Berlin and in 1823 he entered government service where he remained until his retirement fifty years later; by that time he had reached the rank of privy government councillor.

Rudolf Wiegmann was born in 1804 at Anderson, near Hannover. After completing his education, he moved to Darmstadt to study architecture under Georg Moller. He completed his studies in Italy before settling in Düsseldorf. He received commissions to build several private houses, among them one for Wilhelm von Schadow, the director of the Königliche Kunstakademie. That same year Wiegmann was appointed professor at the Kunstakademie, teaching architecture and perspective. He taught at the Kunstakademie for almost thirty years and died in 1865.

Johann Heinrich Wolff was born in 1792, probably in Kassel. In 1814 he went to Paris to study architecture under Charles Percier at the Ecole des Beaux-Arts. He lived in Rome from 1816 through 1818. After his return to Kassel, Wolff worked as an assistant to the court architect, Johann Konrad Bromeis. He began teaching at the Akademie der Künste in 1821 and was appointed professor of architecture in 1832. Wolff died in 1869.

Wolfgang Herrmann was born in Berlin in 1899. He studied philosophy at the Albert-Ludwigs-Universität Freiburg and art history at the Königliche Friedrich-Wilhelms-Universität Berlin (Adolf Goldschmidt), Ludwig-Maximilians-Universität Munich (Heinrich Wölfflin), and the Universität Leipzig (Wilhelm Pindar). He worked at the Berlin Kunstgewerbemuseum and Staatliche Kunstbibliothek. In 1933, however, he was dismissed for being politically “unreliable,” that is, for being of Jewish descent. After emigrating to England, Herrmann entered into private business for nearly thirty years before “retiring” and again devoting himself to the history of architecture.