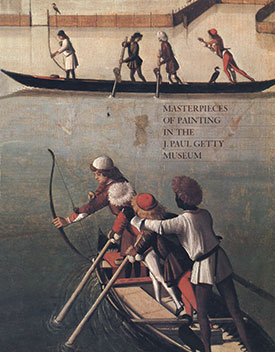 J. Paul Getty began collecting Old Master paintings in the 1930s. He founded his Malibu museum in the early 1950s and continued to contribute to its collections until his death. As he left the museum generously endowed, major works of art have continued to be acquired.

Mr. Getty’s personal preferences inclined toward Renaissance and Baroque painting of the Italian and Netherlandish schools, with some excursions into the art movements of the eighteenth and nineteenth centuries. The masterpieces reproduced here show the care which he and the museum trustees have devoted to the formation of a new museum’s collection.

The J. Paul Getty Museum’s new building was opened to the public in January 1974. It is a replica of the Villa dei Papiri excavated at Herculaneum and provides a spectacular setting for the collection of classical antiquities. The paintings collection is housed in more conventional galleries on the second floor.

Mr. Fredericksen is curator of paintings at the J. Paul Getty Museum.