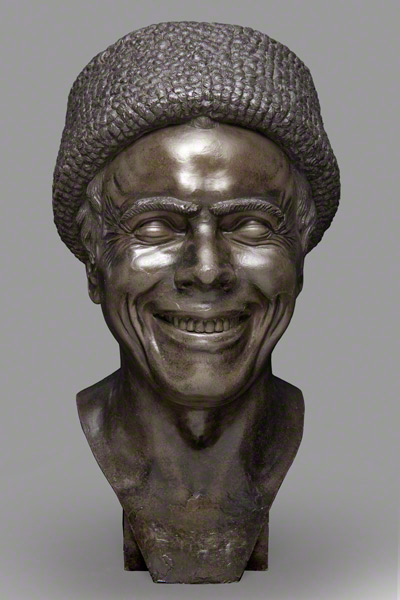 Franz Xaver Messerschmidt enrolled at the Vienna Academy of Fine Arts in 1754 and soon received important commissions from the Habsburg empress Maria Theresa and her consort, Francis Stephen of Lorraine. Messerschmidt visited Rome in 1765, and upon his return, his earlier, more Baroque style shifted markedly toward a spare and sober Neoclassicism and a reductive approach to portraiture that foreshadowed the stark minimalism of the Character Heads.

His circumstances changed dramatically around 1770 when he began to manifest signs of mental instability, leading to the loss of prestigious commissions and to conflicts with colleagues and friends. Messerschmidt suffered a further blow in 1774 when he was passed over for the post of professor of sculpture at the newly created Royal and Imperial United Academy of the Fine Arts because the academy's president reported that he was manifesting some "confusion of mind" and "peculiar quirks of the imagination."

Humiliated, Messerschmidt left Vienna in 1775 to return to his birthplace, Wiesensteig, Germany, trying unsuccessfully to obtain commissions at the electoral court in Munich. Finally, in 1777, he settled in Pressburg (now Bratislava), lodging with his brother, Johann Adam Messerschmidt (1738–1794), before renting his own house in Zuckermandl, near Pressburg. He remained there until his death in 1783, focusing obsessively on the production of the Character Heads as well as more conventional portraits.

Please note that the sculpture shown here is not included in the exhibition at the Getty Center; it is included for reference as the one confirmed self-portrait of Messerschmidt.

Messerschmidt and Modernity
By Antonia Boström