Commercial tourism came to Palestine in 1867, when Reverend Henry Ward Beecher's Plymouth Church organized an excursion for 150 Americans. Mark Twain accompanied them, writing the dispatches that would form the basis for his book Innocents Abroad. 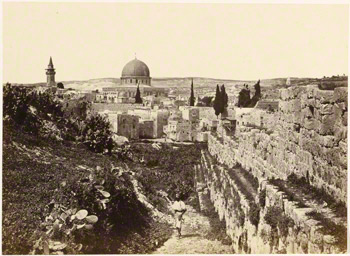 A fast walker could go outside the walls of Jerusalem and walk entirely around the city in an hour. I do not know how else to make one understand how small it is. The appearance of the city is peculiar. It is as knobby with countless little domes as a prison door is with boltheads. Every house has from one to half a dozen of these white plastered domes of stone, broad and low, sitting in the center of, or in a cluster upon, the flat roof. Wherefore when one looks down from an eminence, upon the compact mass of houses (so closely crowded together, in fact, that there is no appearance of streets at all, and so the city looks solid,) he sees the knobbiest town in the world, except Constantinople. It looks as if it might be roofed, from center to circumference, with inverted saucers. The monotony of the view is interrupted only by the Great Mosque of Omar, the Tower of Hippicus, and one or two other buildings that rise into commanding prominence.

Of all the lands there are for dismal scenery, I think Palestine must be the prince. The hills are barren, they are dull of color, they are unpicturesque in shape. The valleys are unsightly deserts fringed with a feeble vegetation that has an expression upon it of being sorrowful and despondent. The Dead Sea and the Sea of Galilee sleep in the midst of a vast stretch of hill and plain wherein the eye rests upon no pleasant tint, no striking object, no soft picture dreaming in a purple haze or mottled with the shadows of the clouds. Every outline is harsh, ever feature is distinct, there is no perspective—distance works no enchantment here. It is a hopeless, dreary, heartbroken land.

Here you feel all the time as if you were living about the year 1200 before Christ—or back to the patriarchs—or forward to the New Era. The secenery of the Bible is about you—the customs of the patriarchs are around you—the same people, in the same flowing robes, and in sandals, cross your path—the same long trains of stately camels go and come—the same impressive religious solemnity and silence rest upon the desert and the mountains that were upon them in the remote ages of antiquity, and behold, intruding upon a scene like this, comes this fantastic mob of green-spectacled Yanks, with their flapping elbows and bobbing umbrellas. It is Daniel in the lion's den with a green cotton umbrella under his arm, all over again.

My umbrella is with the baggage, and so are my green spectacles—and there they shall stay. I will not use them. I will show some respect for the eternal fitness of things. It will be bad enough to get sun-struck, without looking ridiculous into the bargain.

I am sure from the tenor of books I have read, that many who have visited this land in years gone by, were Presbyterians, and came seeking evidence in support of their particular creed; they found a Presbyterian Palestine, and they had already made up their minds to find no other, though possibly they did not know it, being blinded by their zeal. Others were Baptists, seeking Baptist evidences and a Baptist Palestine. Others were Catholics, Methodists, Episcopalians, seeking evidences indorsing their several creeds, and a Catholic, a Methodist, an Episcopalian Palestine. Honest as these men's intentions may have been, they were full of partialities and prejudices, they entered the country with their verdicts already prepared, and they could no more write dispassionately and impartially about it than they could about their own wives and children. Our pilgrims have brought their verdicts with them. They have shown it in their conversation ever since we left Beirut. I can almost tell, in set phrase, what they will say when they see Tabor, Nazareth, Jericho, and Jerusalem—because I have the books they will "smouch" their ideas from. These authors write pictures and frame rhapsodies, and lesser men follow and see with the author's eyes instead of their own, and speak with his tongue...

They have spoken often, in happily worded language which never varied, of how they mean to lay their weary heads upon a stone at Bethel, as Jacob did, and close their dim eyes, and dream, perchance, of angels descending out of Heaven on a ladder. It was very pretty. But I have recognized the weary head and dim eyes, finally. They borrowed the idea—and the words—and the construction—and the punctuation—from Grimes. The pilgrims will tell of Palestine, when they get home, not as it appeared to them, but as it appeared to Thompson and Robinson and Grimes [popular authors]—with the tints varied to suit each pilgrims creed.