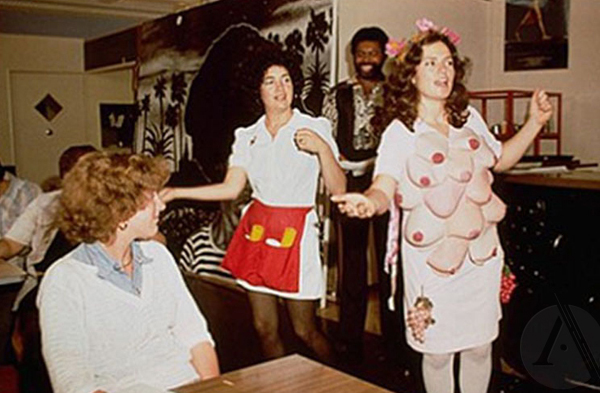 Coffee Cauldron: A Restaurant Ritual, The Waitresses, 1980. Gift of Jerri Allyn and Anne Gauldin. Photo: Maria Karras. Getty Research Institute, 2017.M.37
Happy Women's History Month! This month a visionary queen rebels against the ancient Romans; a 70s art group serves up facts on gender inequality in the food service industry; a new finding aid offers a peek into the underground video art of 90s feminist punk; and we mourn the loss of a fierce defender of women's art.

Art critic and historian Cindy Nemser passed away on January 26, 2021. The co-founder of The Feminist Art Journal, Nemser was an avid feminist and advocate for women artists. Her papers comprise an extensive collection of taped interviews with artists such as Eleanor Antin, Eva Hesse, and Gordon Matta Clark. Listen to the Getty podcast, Radical Women, to hear rare interviews with prominent female artists drawn from Nemser's tremendous archive.

In the late 1970s, artist Anne Gauldin, who co-founded the performance art group The Waitresses, created a costume inspired by the many-breasted goddess Diana. Now, GRI conservators are restoring the garment that has become an important piece of feminist art history.


The Black Women Activists Behind the Montgomery Bus Boycott

Artist Lava Thomas's hand-drawn portraits, based on the mug shots of women who were arrested during the Montgomery bus boycott of 1955 and '56, illuminate the under-acknowledged legacy of Black women's activism.

In honor of our relaunched online exhibition, Return to Palmyra, we revisit a 2017 story from the Iris about Queen Zenobia, visionary queen of the ancient trading center, who led the city in a revolt against the Romans in AD 267, and almost won.

Hollywood Arensberg: Arriving at the House

Room by room, the photographs in Hollywood Arensberg: Avant-Garde Collecting in Midcentury L.A. reconstruct the convergence of cultural artifacts in Louise and Walter Arensberg's modernist home, the center of a burgeoning art scene. In the second of two conversations, panelists explore how the context of the collection shapes how it is assembled, displayed, and interpreted.

This event is one of a two-part series presented by Getty Research Institute in partnership with Philadelphia Museum of Art.

The second conversation in our Imaginaries of LA series brings together artist Guadalupe Rosales and curator Rita Gonzalez, who discuss how the making of art and archives from embodied, lived experiences can transform the social and political production of urban space.

Jason De León discusses the origins of the Undocumented Migration Project (UMP), a nonprofit research, arts, and education collective that raises awareness of the plight of Latin American migrants attempting to enter the United States. De León shares some of his team's ongoing projects including Hostile Terrain 94, a global participatory exhibition focused on migrant death that launches this year in 130 locations.

Beginning in the 17th century, a practice of assembling calligraphy fragments into albums known as tekagami (mirror of hands) boomed in Japan. This transdisciplinary colloquium exposes tekagami to diverse cultural and theorized perspectives, exploring the implications of fragmenting and the transformation of fragments into collectables, re-used, assembled, preserved and displayed.

Out of Bounds: The Collected Writings of Marcia Tucker

These influential, hard-to-obtain texts by Marcia Tucker, founding director of New York's New Museum, showcase her lifelong commitment to pushing the boundaries of curatorial practice and writing. The only comprehensive bibliography of Tucker's writing, published in 2019, the volume highlights her critical attention to art's relationship to broader culture and politics.

Browse the full issue.
Subscribe to the Getty Research Journal.

In 1995, interdisciplinary artist Miranda July created Joanie 4 Jackie, a video art "chain letter" and zine. Part of the Riot Grrrl scene in the 1990s, July was frustrated by the lack of girls and women creating film and video–particularly women of color, and queer, older and low-income women. She sought to remedy their absence with a project that embraced the "DIY" ethos of the vibrant Riot Grrrl subculture.

The Getty Center and Getty Villa are closed to the public and most staff as the region works to minimize the spread of coronavirus (COVID-19). We look forward to welcoming visitors when Los Angeles County public health officials authorize us to do so. We will continue to share updates on our response to COVID-19 on our website. Follow us on Facebook and LinkedIn for more news and resources.

At the Getty
Exhibitions and event highlights