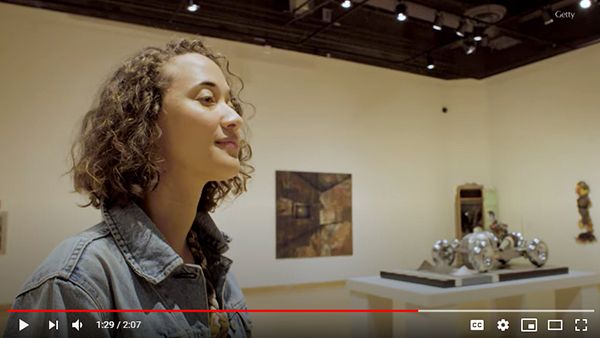 The Getty Foundation has released the first major report on the impact of its Getty Marrow Undergraduate Internship Program, showing that it successfully influences individuals from underrepresented backgrounds to pursue careers in art museums and visual arts organizations. Specifically, about one third of Getty Marrow interns have gone on to work in the arts, and 92% of those interns attribute their career paths to the program. The internships have also resulted in a high level of engagement with the arts: 80% of intern alumni regularly visit cultural institutions and 45% have become members of arts organizations.

Since 1993 the program has supported paid positions for more than 3,200 interns at 175 organizations across L.A. County, including at the Getty Center and Getty Villa.

Read on and watch a video »

For 35 years, artists Antoni Muntadas and Marshall Reese have collected presidential campaign television ads. And every election year, they release their updated anthology. Their latest iteration, Political Advertisement X: 1952–2020, surveys the American campaign process from Dwight D. Eisenhower to Donald J. Trump. Screen the movie online and then join a conversation between the artists and Tanya Zimbardo, assistant curator of media arts at the San Francisco Museum of Modern Art.

Register for the free screening and conversation »

Greek mythology for the whole family

Greek myths, filled with action-packed adventures and fantastical monsters, are arguably some of the greatest stories ever told. Sure, they appeal to readers of all ages, but they are particularly fascinating for kids. Even while the Villa remains closed, there are many great resources to introduce or keep kids learning about Greek mythology from home, including board book series, graphic novels, card games, and funny fill-ins. And hey, why not nestle next to your little or not-so-little one and brush up on Greek mythology yourself!

This week we look back at a major conservation project: an obelisk that was the tallest object ever displayed at the Getty Museum. When it got back home to Italy, a local photographer was on the scene to document the fascinating process of reassembling this 19-foot-high, 2.5-ton ancient work.

Go behind the scenes »

A curator reflects on solitary spaces

Davide Gasparotto, senior curator of paintings at the Getty Museum, is spending much of his time locked down in one room of a small Santa Monica apartment. And that has made him think about a mesmerizing painting by Danish painter Vilelm Hammershøi, sometimes known as the modern Vermeer. Hammershøi is renowned for his meditative interior scenes, and this depiction of his apartment and studio in Copenhagen is among the most enigmatic and compelling of these.

Listen to the three-minute podcast »