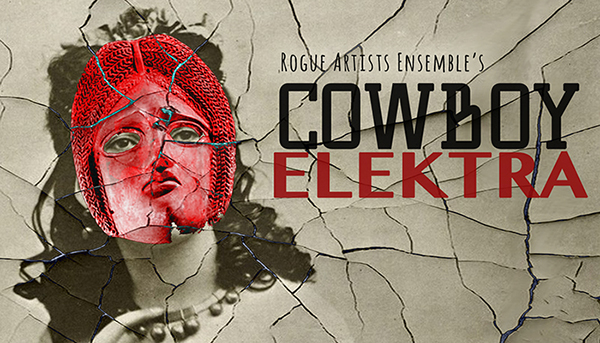 Encounter a dusty crossroads where California history and Greek tragedy collide. Set in a saloon in 1869, Elektra's investigation of her father's death leads to a tragic revenge plot against her mother. This modern feminist tale features original songs, a mostly female ensemble, vintage puppetry, and multimedia. The Rogue Artists Ensemble debuts a visual, emotional collage that asks: how much can we truly control our fate? By award-winning playwright Meghan Brown, directed by Sean Cawelti, with songs by Z. Lupetin. Tickets $7.


Learn more and get tickets »

ITSOFOMO (In the Shadow of Forward Motion) is a multimedia performance created in 1989 by David Wojnarowicz in collaboration with composer and musician Ben Neill. Integrating music, text, and video in a multi-dimensional format, the work embodies the act of acceleration and its sensory manifestations. It is through this frame that Wojnarowicz addressed the accelerating AIDS crisis and the politics of AIDS in the United States at that time.


Learn more about this free event and get tickets »

Formed in 2006, 3MA features Ballaké Sissoko and Driss El Maloumi on the lute-like instruments kora and oud, and Rajery on valiha, an instrument described as part-zither, part-lute. The three, hailing from Mali, Morocco, and Madagascar, create new compositions inspired by their respective traditions and deep friendship. The band's shared musical language brims with energy, harmony, and poetry.


Leaern more about this free event and get tickets »

Revered for its velvety matte surface and neutral palette, the platinum process, introduced in 1873, helped establish photography as a fine art. The process was championed by prominent photographers until platinum was embargoed during World War I, but it attracted renewed interest during the mid-20th century from a relatively small but dedicated community of practitioners. This exhibition draws from the J. Paul Getty Museum's collection to showcase some of the most striking prints made with platinum and the closely related palladium processes.

Artist at Work: Fashion and Impressionism

Modern life, fashion, and art intersected in the works of the French Impressionists, rendering a new and influential Parisian aesthetic. Join costume historian Maxwell Barr and discover how corsets, bustles, and bonnets shaped 19th-century silhouettes, attitudes, and tastes as he outfits a live model in a series of period costumes, including a remarkable recreation of the dress featured in Édouard Manet's painting Jeanne (Spring) from the Getty collection. Complements the exhibition Manet and Modern Beauty.

During the Middle Ages, West Africa was home to rich and dynamic cultures that created objects whose power and beauty continue to resonate today. Most spectacular were those made of gold. In this talk, Gus Casely-Hayford, director of the Smithsonian's National Museum of African Art, traces the history of gold and the growth of West Africa's empires. By exploring this network, which includes the powerful emperor of Mali, Mansa Musa, he reveals the impact these former kingdoms continue to have on contemporary values and cultural expression.


Learn more about this free talk and get tickets »

Käthe Kollwitz was a political artist, at least in the sense that she wanted to have an impact on viewers. But how do her images deliver messages without words? Annette Seeler, an independent scholar and former curator of the Käthe-Kollwitz-Museum Berlin, examines the unique strategy of pictorial communication that Kollwitz developed over seven years while producing her series Peasants' War (1901–1908).


Learn more about this free talk and get tickets »

Drawing from the Masters: The Art of Darkness

Discover the expressive power of light and shadow to create dramatic and evocative drawings with artist Kaitlynn Redell.

Learn more about this free program:


Drinking in the Past: The Intoxicating Art of Impressionism
Talk and Tasting

French café and bar culture inspired discourse, drinking, and subject matter for many Impressionists. Join Maite Gomez-Rejón (ArtBites) in an exploration of the multilayered history of Édouard Manet's late-19th-century Paris. Then, raise a glass to Manet and discover four fabulous champagnes curated by Ian Blackburn (WineLA) at the wine tasting to follow in the Getty Restaurant (includes hearty appetizers). Tickets $75; ages 21 and over.


Learn more and get tickets »

The depiction of fabric in ancient sculpture can create movement, enhance the human body, and even identify a figure. In this workshop, first explore the Villa's galleries looking closely at different types of fabric folds in marble and bronze, and then draw a sculpture that inspires you.


Learn more about this free course »

Making Scents of the Ancient World: Aromas of Mesopotamia

Perfume was everywhere in the ancient world, from oils used to scent or heal the body to aromatic incense burned in homes and temples. The ancient Mesopotamians and Assyrians developed scented oils suitable for hair, beard, and body using fragrant plants, flowers, resins, and spices. Build your own perfume incorporating ingredients used in antiquity and bring the past home with you. Complements the exhibition Assyria: Palace Art of Ancient Iraq.

Learn more about this free course:

Enrich your Saturday nights. Join an open-ended discussion in the galleries to heighten your appreciation and understanding of the visual arts by exploring one masterpiece with an educator. The chosen work of art changes every session, making each visit a new experience.

Learn more and get tickets »

FROM THE GETTY STORE

These new sculptures of Venus and Hercules were inspired by two of the most popular pieces in the collection of the Getty Villa Museum. Crafted of bonded marble, these high-quality reproductions will add elegance to your home or office.

When we combine our efforts with your support, the result is extraordinary. As a Patron, you'll receive special benefits that will bring you closer than ever to Getty.